From having fun with “Island Survival Kits”, to training developers on the other side of the world, 2016 was a great year for us. We’re capping off our year by talking about some of the apps we launched, the fun times we had, and the friends we made.

We attended five conferences in 2016.

In March, our entire company (at the time) attended and sponsored EmberConf and Ruby on Ales back-to-back. It’s no secret that we love EmberConf, and it’s not just because we need an annual excuse to eat ridiculously amazing chicken.

After EmberConf, we packed up for Ruby on Ales. We rented a Yukon XL SUV and drove through the Cascade mountains with a newfound friend (Hi Vaidehi!). Ruby on Ales was a different kind of conference, but it was a really fun one. 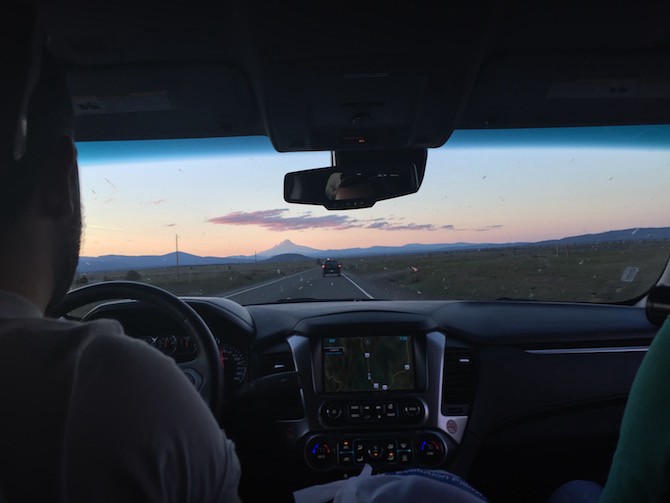 Our EmberConf -> Ruby on Ales SUV

We went to and sponsored Wicked Good Ember in June. Since this conference was on an island, we made surprise “Island Survival Kits” to hand out to everyone. The conference also allowed camping, so I decided to take the opportunity to sleep in a hammock overlooking the Boston Harbor. Recommended. 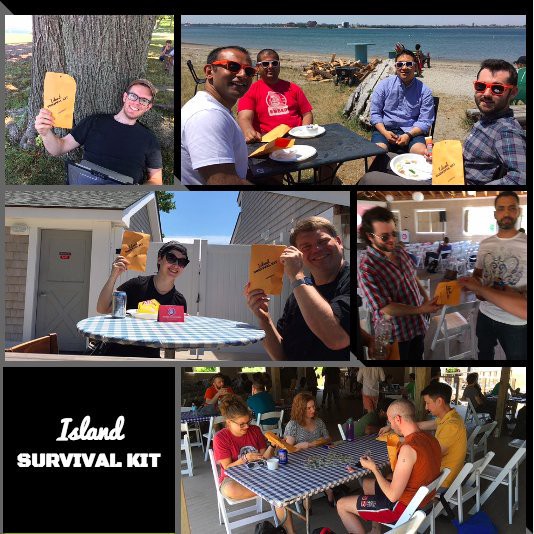 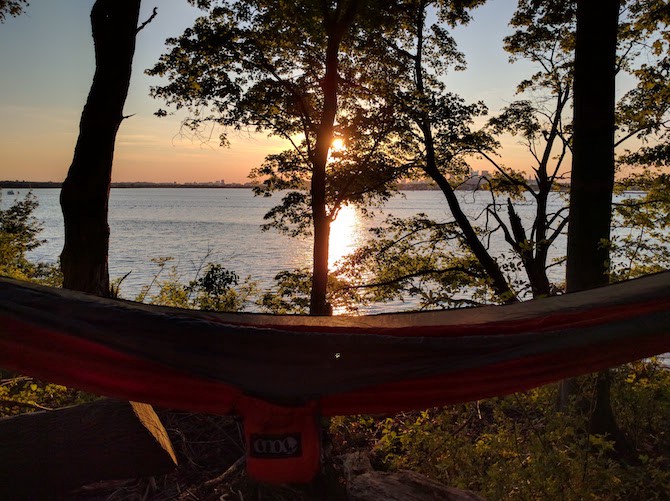 A hammock over the harbor

If you weren’t able to make it, check out our video that captures the sights and musical sounds of the conference.

We sent multiple people to ElixirConf in Orlando, had a blast despite the weather, and documented many of the talks through photos. Taking a Nerves workshop made it clear that this language thrives in places you wouldn’t expect. Elixir is making waves, and we’re happy to be a part of it.

We also went to the very first elm-conf in St. Louis. Not surprisingly, many of our friends from the Ember and Elixir communities were there too. 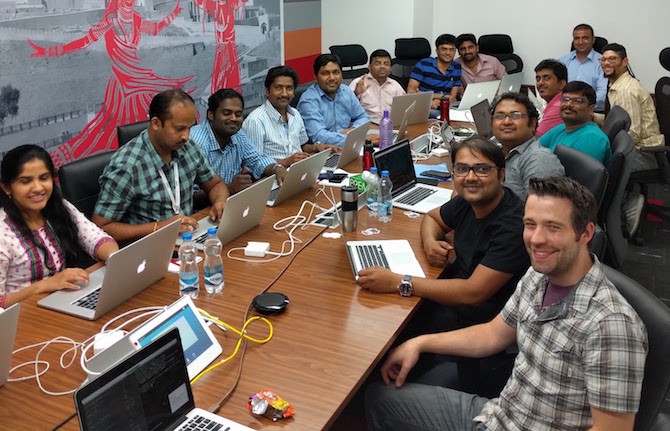 Training in Bangalore. The mural read “Amber Fort” and was used for an Ember training! 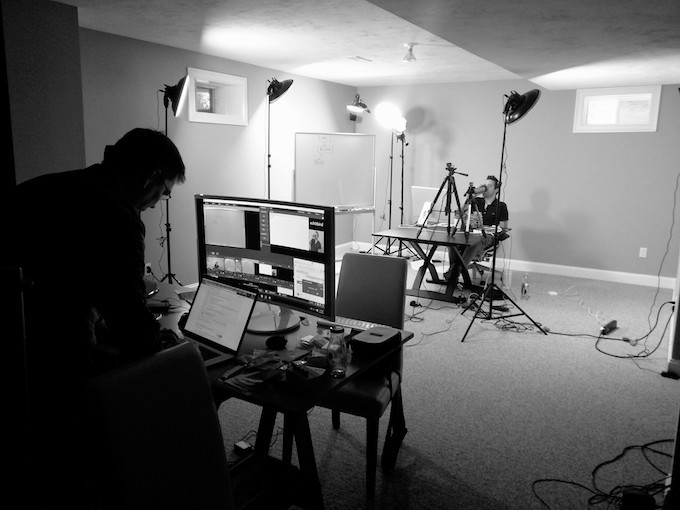 We tried to do an on-site training in Ottawa, but the Canadian border patrol had better ideas. Unfortunately, it’s easier to get training VISAs for India or Costa Rica than it is to help our neighbors to the North. Ask us sometime if you want the full story!

Trainings require a lot of prep time. We’ve found that to really maximize value for the trainees, the course should be adapted to the skill level of the group and changed on-the-fly.

In 2017, we are considering adding hyper-focused workshops on specific topics instead of trying to teach everything we know about a specific framework in a few days.

We’ll continue to offer full scale trainings as they are still useful to some companies. We think for many individuals and teams though, workshops are easier to digest. They are also easier on us to prepare.

In 2016, we ran the Boston Ember and Ember.js Louisville meetup groups, and started Elixir Louisville and Boston Frontend near the end of the year.

We love giving back to the communities we’re involved with every day. We want to continue and grow these groups in 2017. 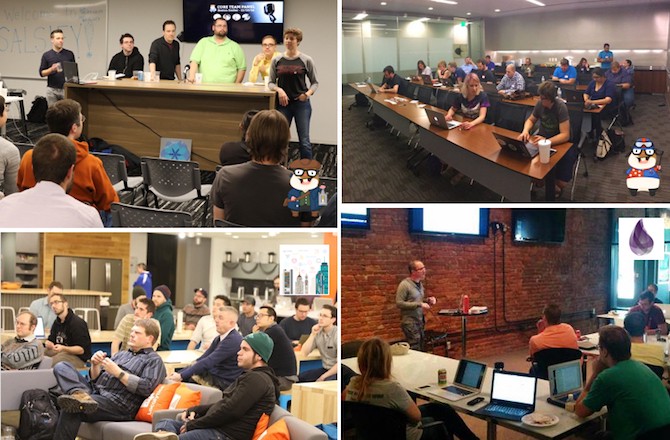 We hired Charlotte Emslie as a marketing intern in May. Charlotte was our first intern at Echobind and did great work for us. She helped us throughout the summer and a little bit into fall, but it became (understandably) difficult for her to balance school and work. Thanks for everything Charlotte!

We also hired Alvin Crespo at the end of August. Alvin has been an incredible addition to the team and we can’t wait to see where he enables us to take the company in 2017.

Thanks to Chris Power, Colin Mathews, Glenn Erikson, and Tyler Hill for working with us on various projects throughout the year and continuing to be a part of our team. 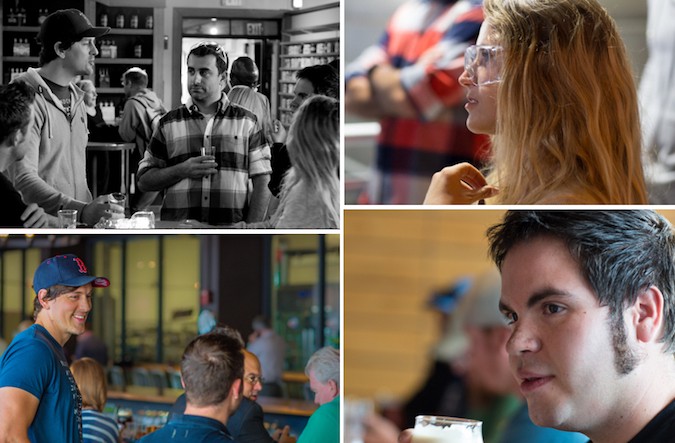 We wouldn’t be able to do what we do without all of the amazing clients we’ve worked with.

In 2016, we had the opportunity to build or help teams build:

In no particular order, thank you so much to our friends at Teladoc, QPID Health, Guardant Health, Humanyze, TechGen, Decision Resources Group, Ovation, MailHaven, Utile, VersaPay and Ciena. We loved working with all of you!

Some plans are already in place, and others are just being formed. But we’re really excited about 2017. Here are a few things you’ll see from us soon:

We’ve had our current brand since the beginning of the company. It’s served us well, but we decided that it’s time to update and modernize it. You can see our new logo on the site now. Expect a completely new brand (including a new site, copy and assets) to launch in early Q1.

We started sharing our knowledge more in 2016. We’ve put plans in place to further increase the content we provide. We hope to build a valuable resource for fellow developers and potential clients to learn from our experiences.

We want you to be a part of the conversation. Join our once-a-month emails to receive our best articles and stay informed on important industry trends.

A bet on React Native

At Echobind, we love and believe in the web. Progressive Web Apps certainly seem like the future. But after experimenting with them, we don’t feel they are the best option for clients just yet. In 2017, we’ve decided to focus on React Native for our clients that need a native app rather than try to pitch PWAs or Cordova as a native solution.

We’re really excited about React Native, and we have an article coming soon that will explain all the reasons why.

More additions to the team

We’ll continue to grow the company in 2017 and plan to add more amazing developers to our team.

It’s been an understandably hard year for many people, but for us as a company it’s been a great one. We’re very proud of the path we’re on and the trajectory we have going into 2017.