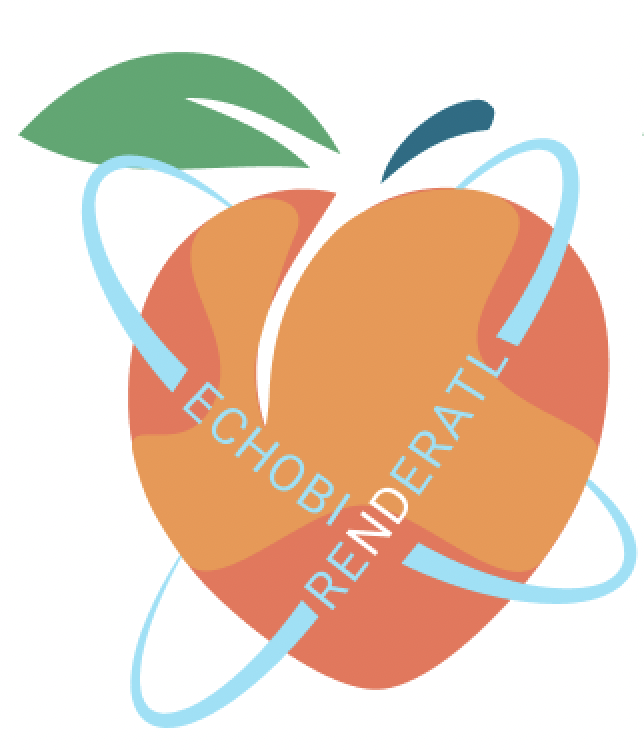 RenderATL was our first in-person dev conference since the pandemic, which was initially billed with a focus on React. As React is one of the main tools we use here at Echobind, we joined as cultural sponsors for the conference.

This presented a unique challenge of creating a physical booth at an event that’s largely about coding and black representation. How do we go about representing the culture — both of the conference and of the city itself?

To get started, it was important to really break down a few of the goals of the booth as cultural sponsors:

Additionally, we had a few internal goals for the booth — namely:

As we talked more about it internally, it was mentioned that Chris Ball, our CTO, had really enjoyed the signing wall at a different conference that he knew the organizers from and so we planned to create a similar experience to that.

Initially, Alex Patrón (Echobind’s Creative Director) and I tossed back and forth several ideas for generative art — we weren’t sure how much bandwidth we’d have from the dev team to develop something for the conference, but we were working with what we knew: video art & synthesis, old Processing sketches, Unity 3D, and so on — planning to do projection art.

A screenshot of the inspiration board — including generative art, generative design, the Poooli printer, and video synthesis for Unity 3D and analog video 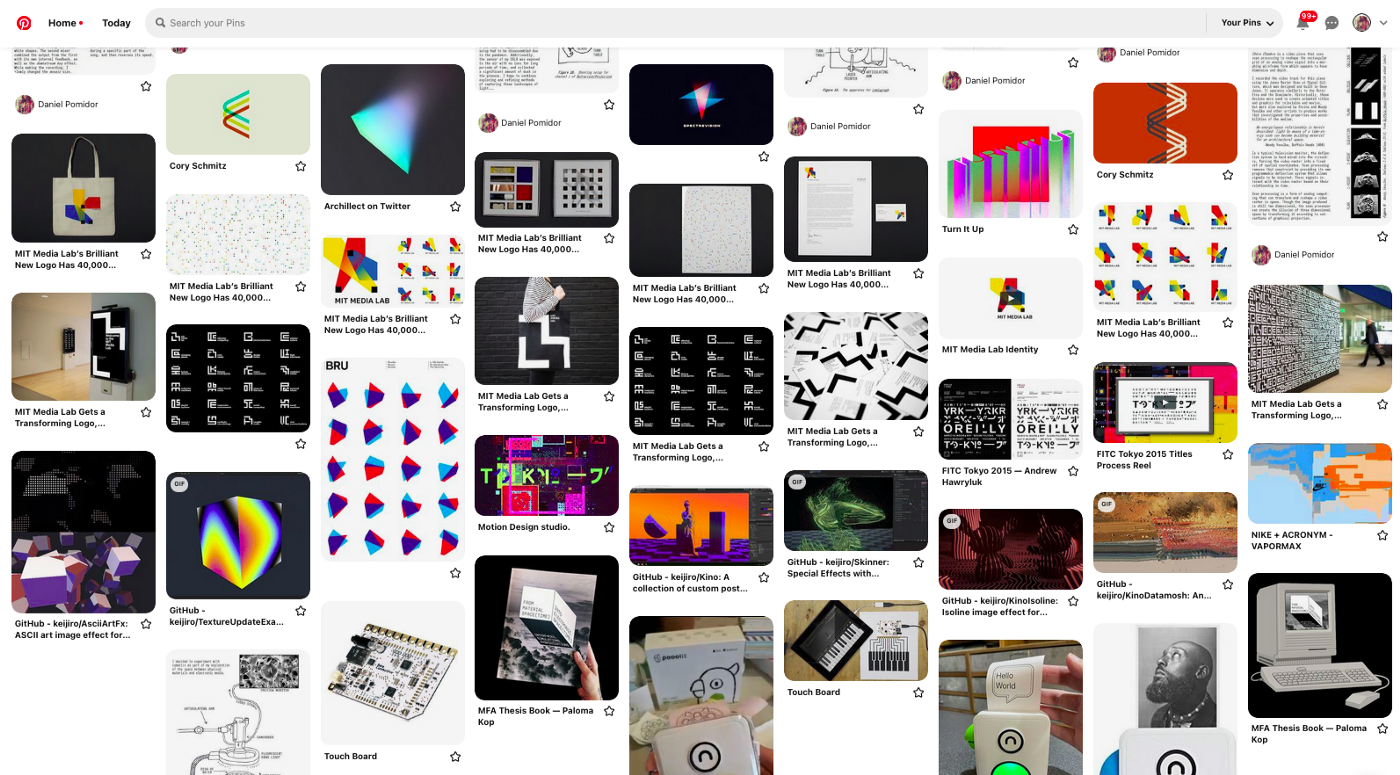 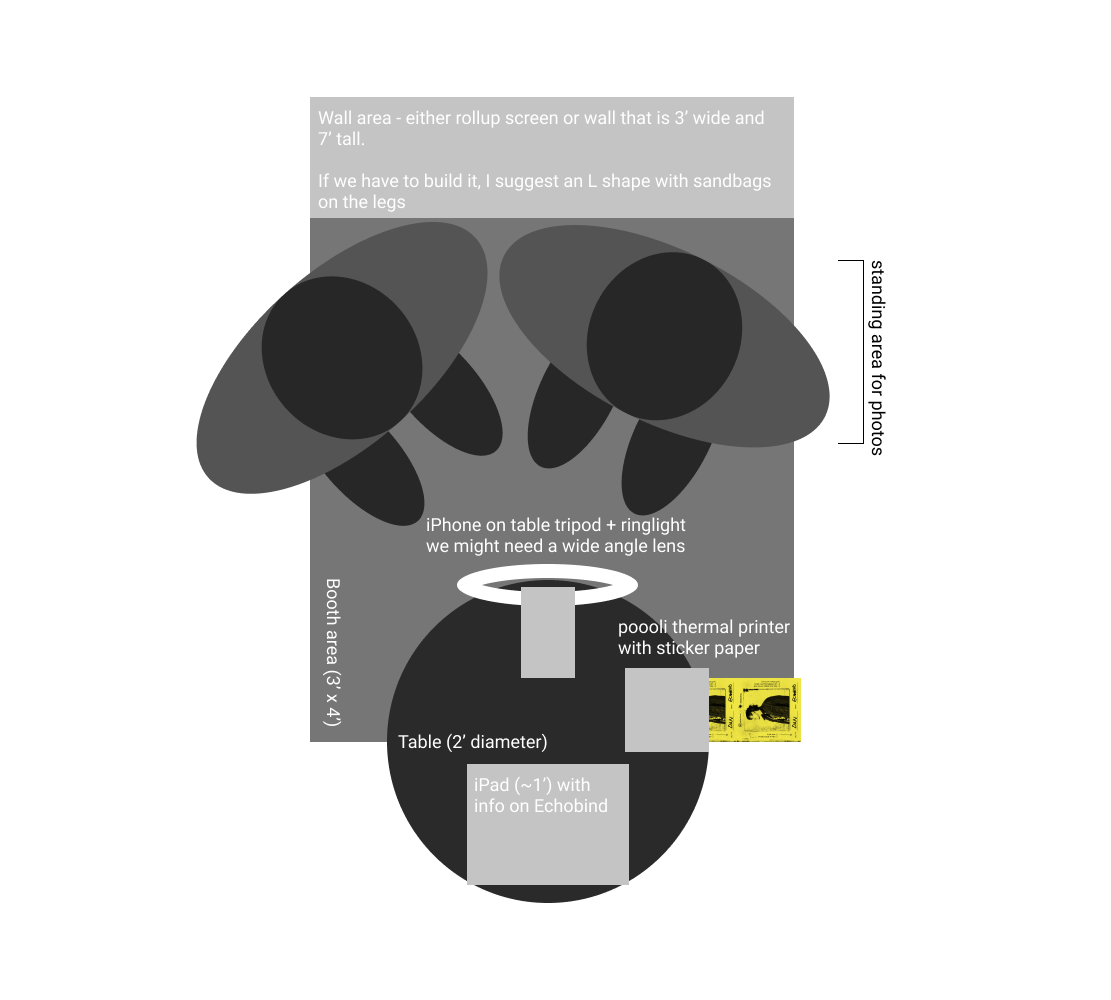 We landed on using a standing banner as our interactive piece — on one side, we’d have a mural by a local Atlanta artist (Faatimah Stevens). For the sake of speed and efficiency, we had them send us a “digital mural” — a piece they created using digital painting and typography — and printed that on the banner.

Faatimah Stevens’ mural, recommended to us by RenderATL as a local artist that we could work with for the conference.

On the other side of the banner, we really tried to think of a way that attendees would be able to interact with Atlanta culture in a novel way. Initially, the idea was that attendees might sign a landmark, or the mural itself, or something we projected digitally…

Anyone walking around Atlanta knows about slappies — every street corner, every light post, every stop sign has a slappy on it. A slappy, in street art terminology, is usually just a sticker — but the kind small enough that the creator can innocuously slap it on nearly any surface without drawing suspicion. Perfect for signs, poles, bathrooms, windows, drive-thrus, public transit — etc.

The branding of RenderATL, as well, is in cooperation with the Trap Music Museum — they provided interior decorating (like the now-famous Money Room), attendees had Cuban-link lanyards, they had trap playlists for every day of the conference, and the branding was bright and colorful.

Drawing from both of these things, we found a way to incorporate our interactive installation in a unique way that blended in with the spirit of the conference. Using a Poooli thermal printer, we’d take photos of attendees, put them into a cute slappy template, print them onto colorful sticker paper, and then have the attendees sign their names and where they’re from.

The final piece of the puzzle was having them slap the sticker “onto” an Atlanta highway bridge overlooking the downtown skyline, amongst a bunch of actual local stickers. 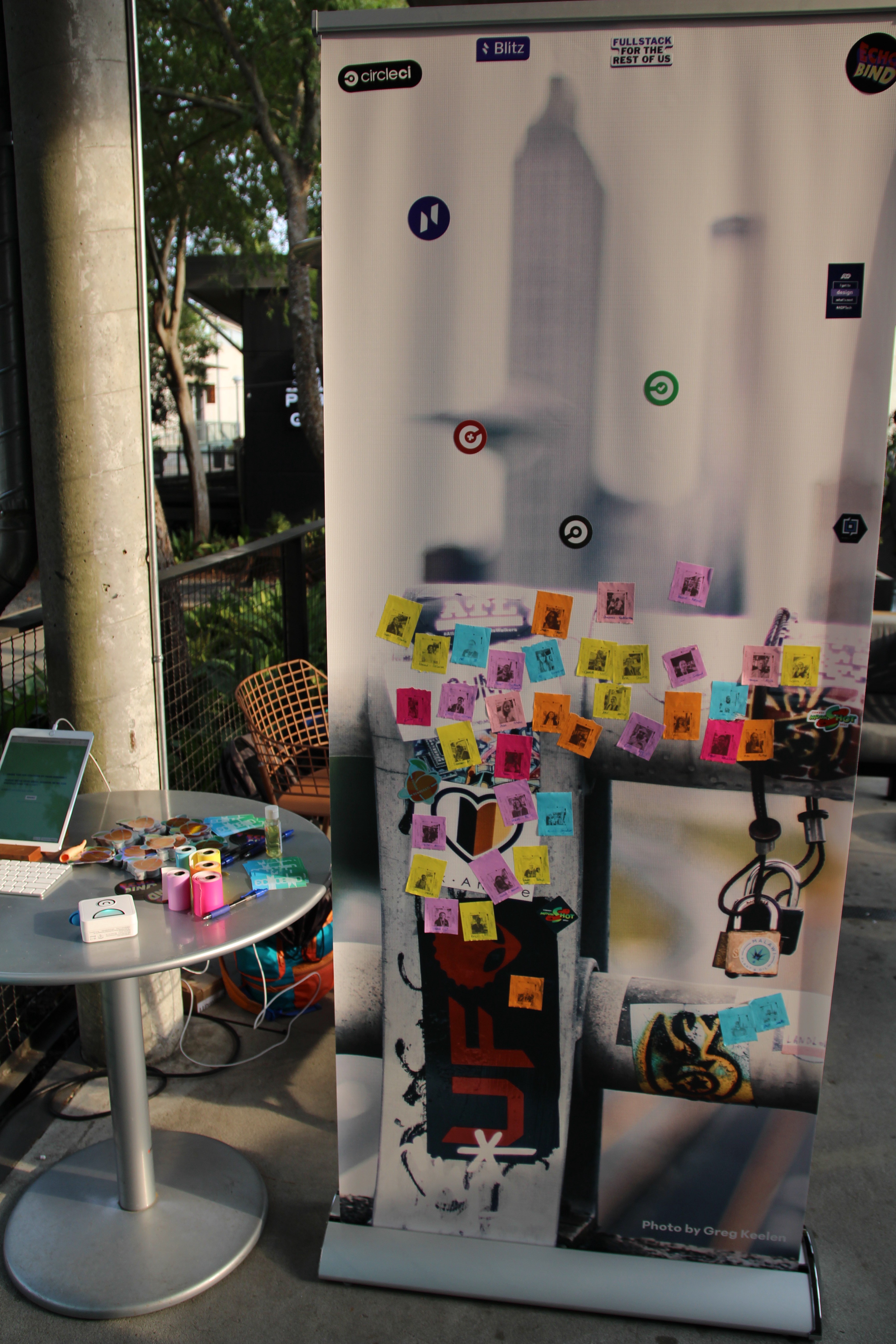 Where the Rubber Hits the Road

Running the booth — that’s a different ballgame. Once we got to Atlanta and started test printing photos on the banner, we realized:

To the right, Echobind’s booth with Faatimah’s artwork clearly visible 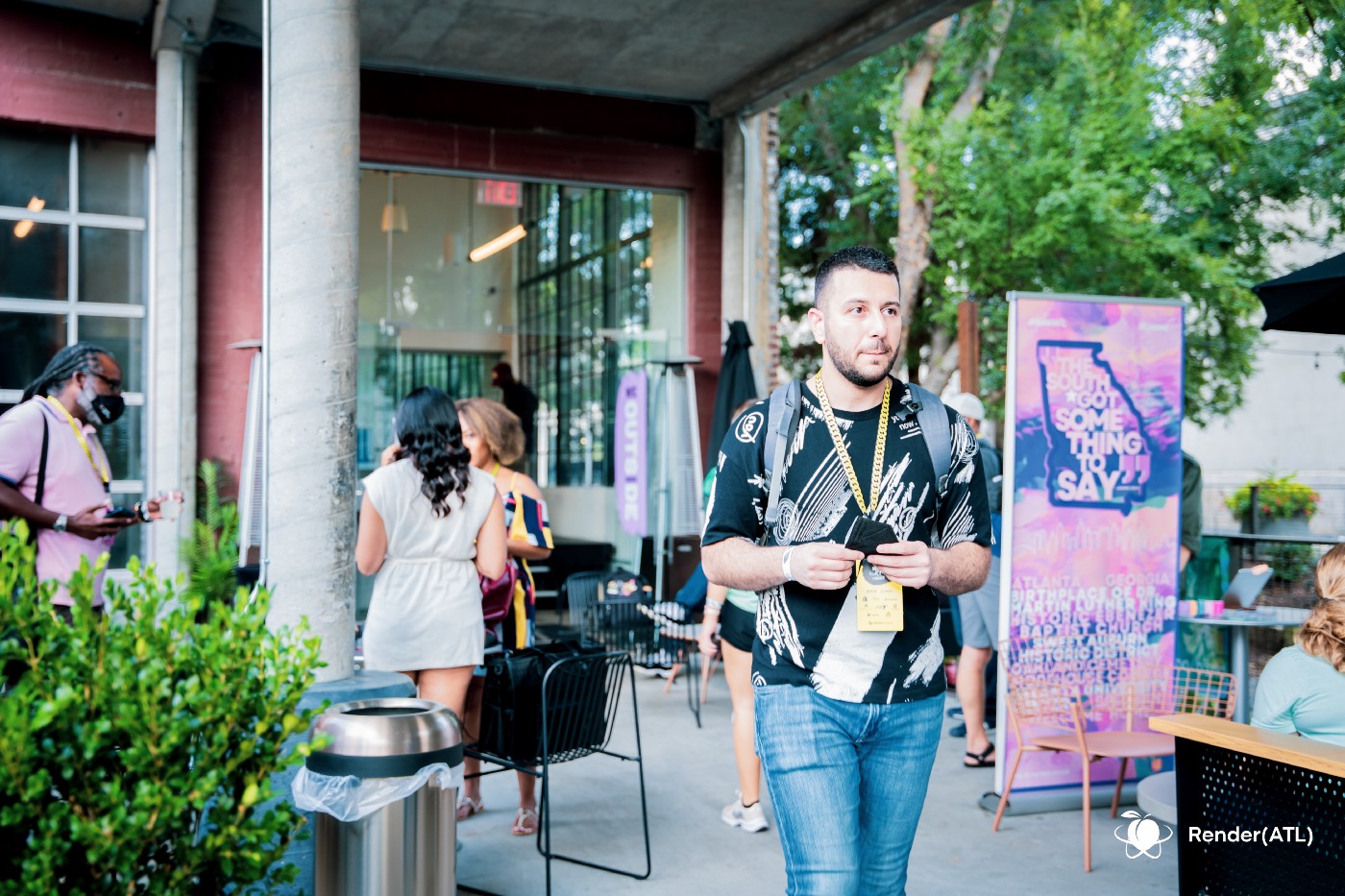 At our booth, we had set up: 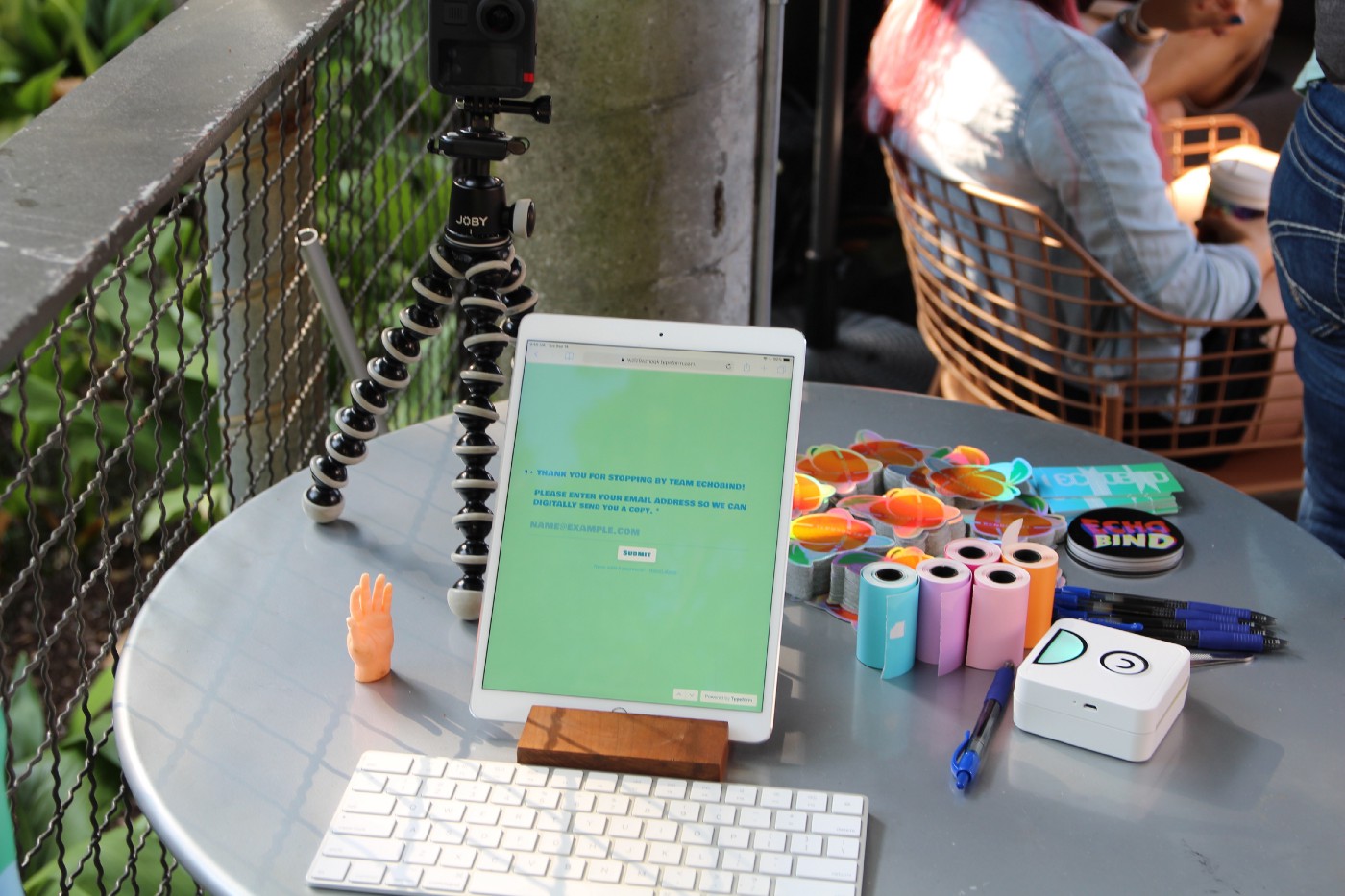 Being outside had enormous benefits — as it was, outdoors was the area people could take off their masks and momentarily relax, which eased socializing. We were also set up next to a bunch of the chairs and couches, so what went from being a difficult and cramped space to plan for instead turned into a wide-open and inviting hangout area. The entire Echobind team could sit near the booth! 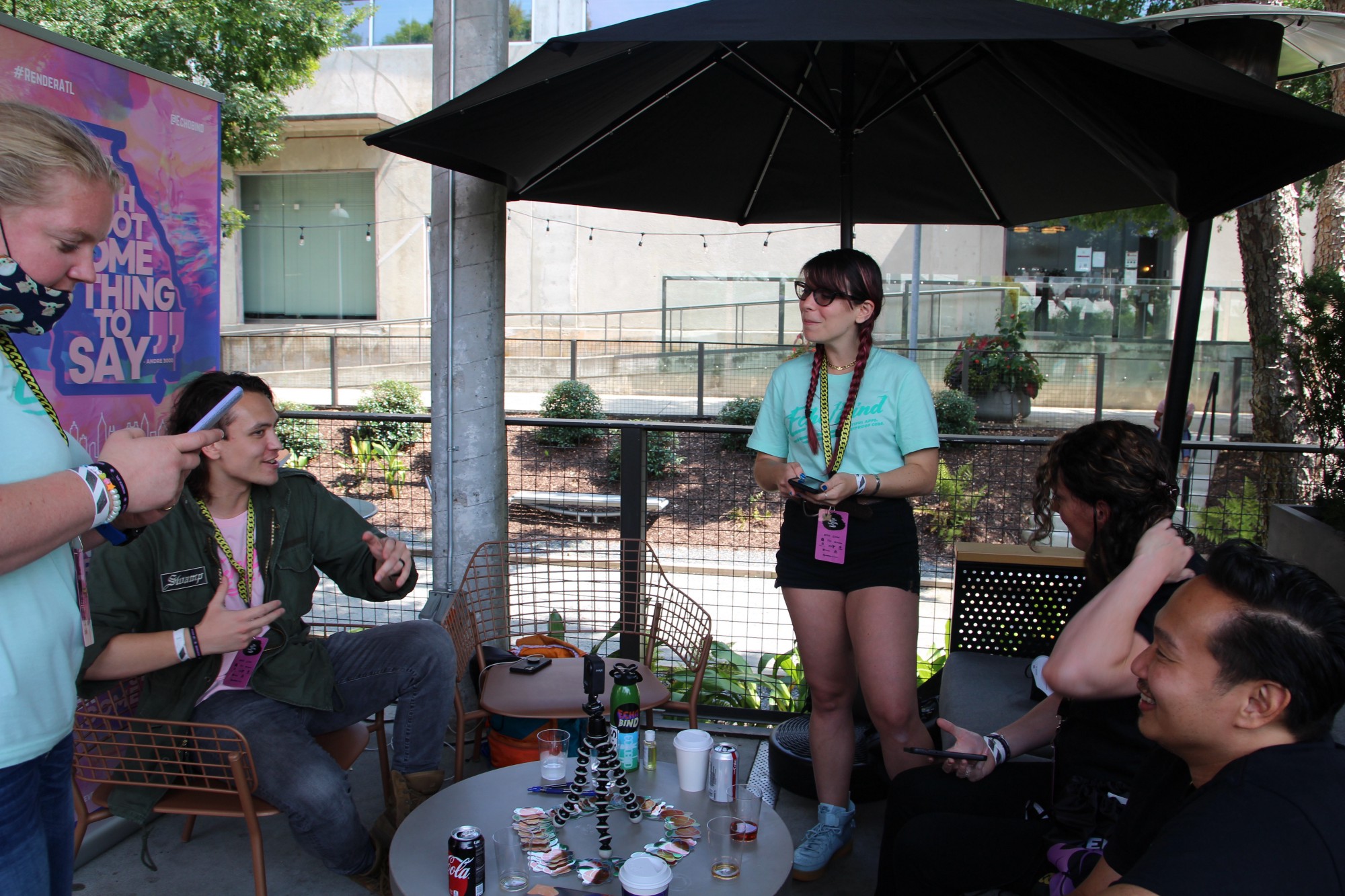 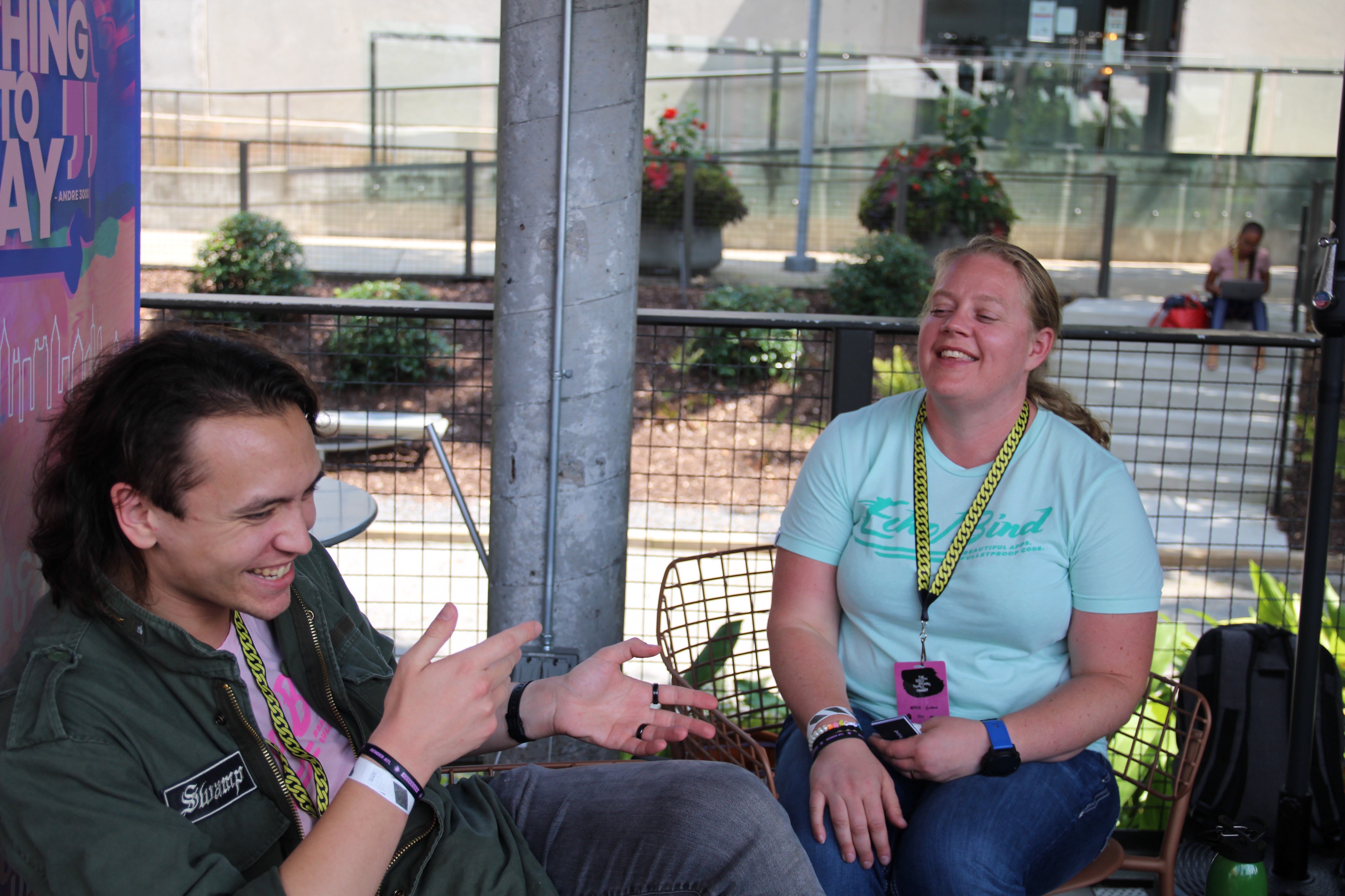 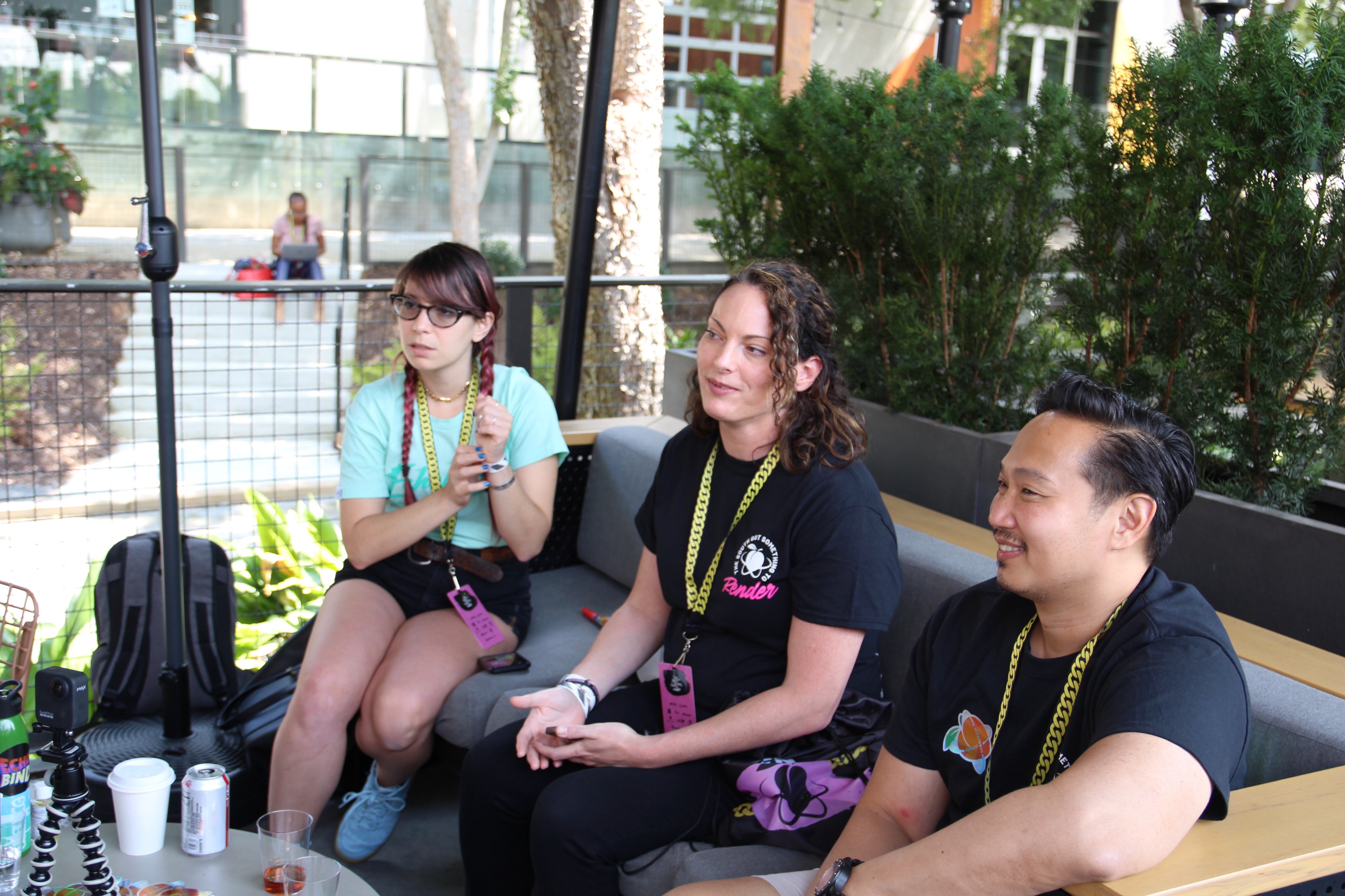 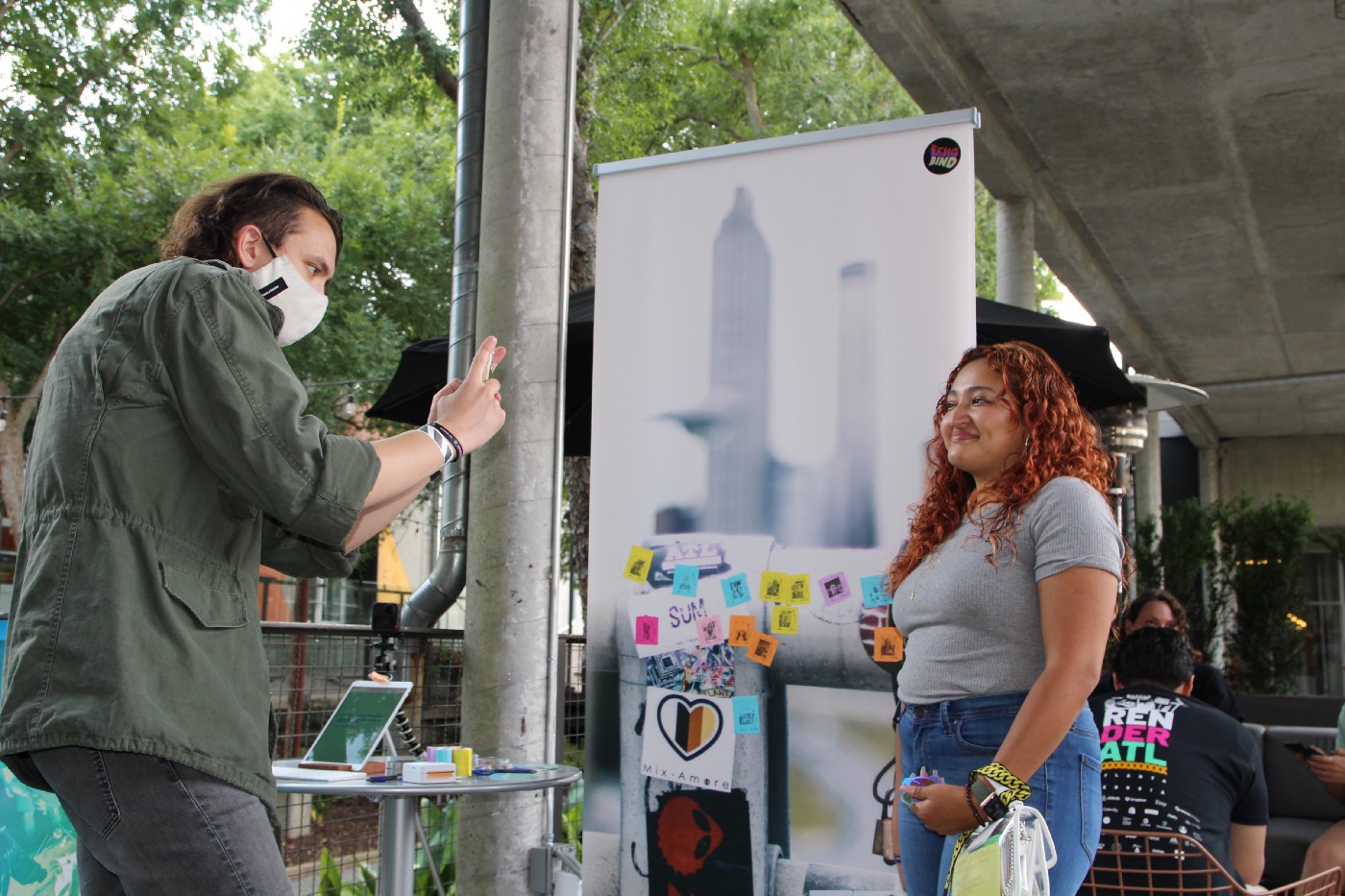 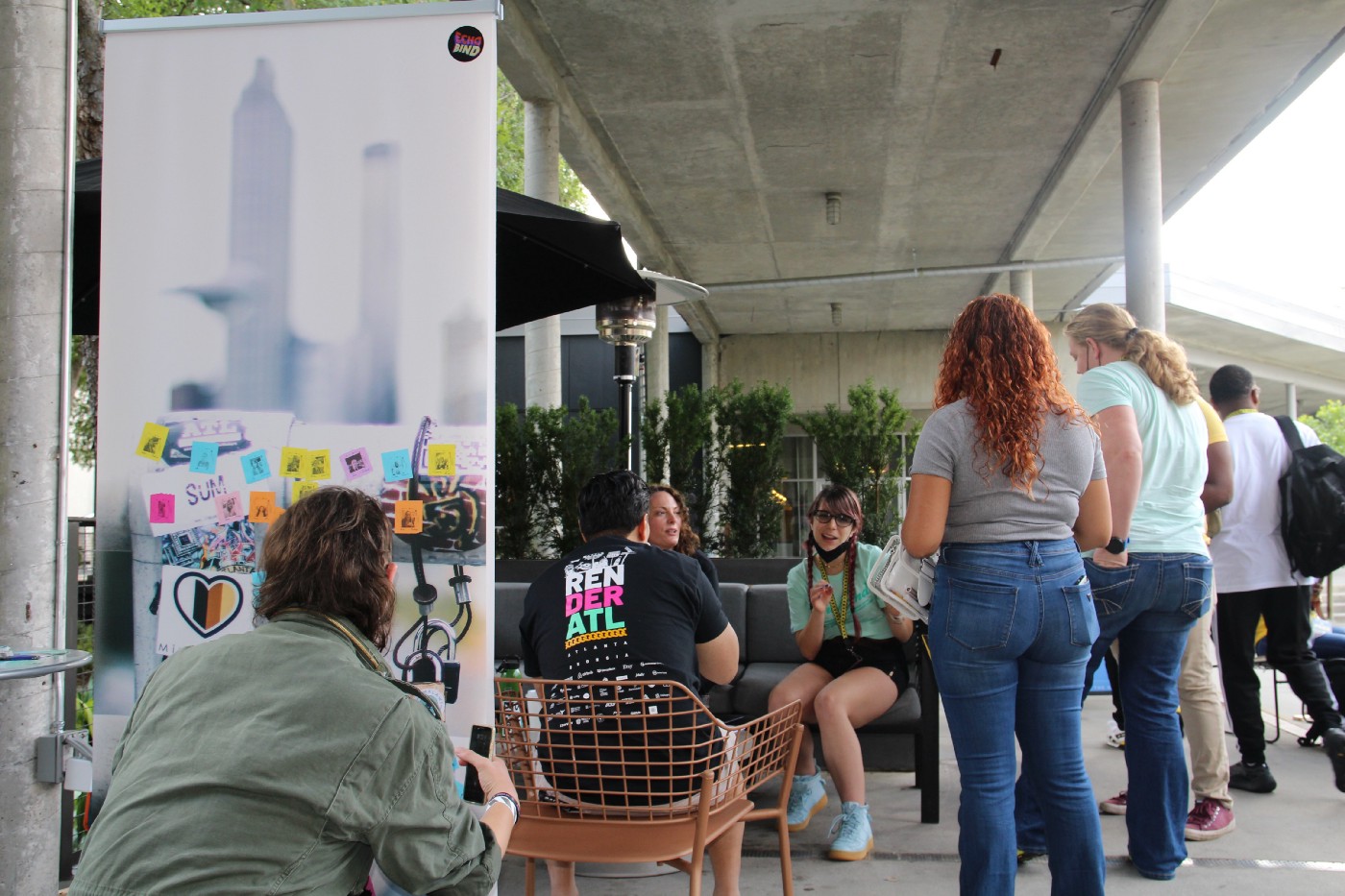 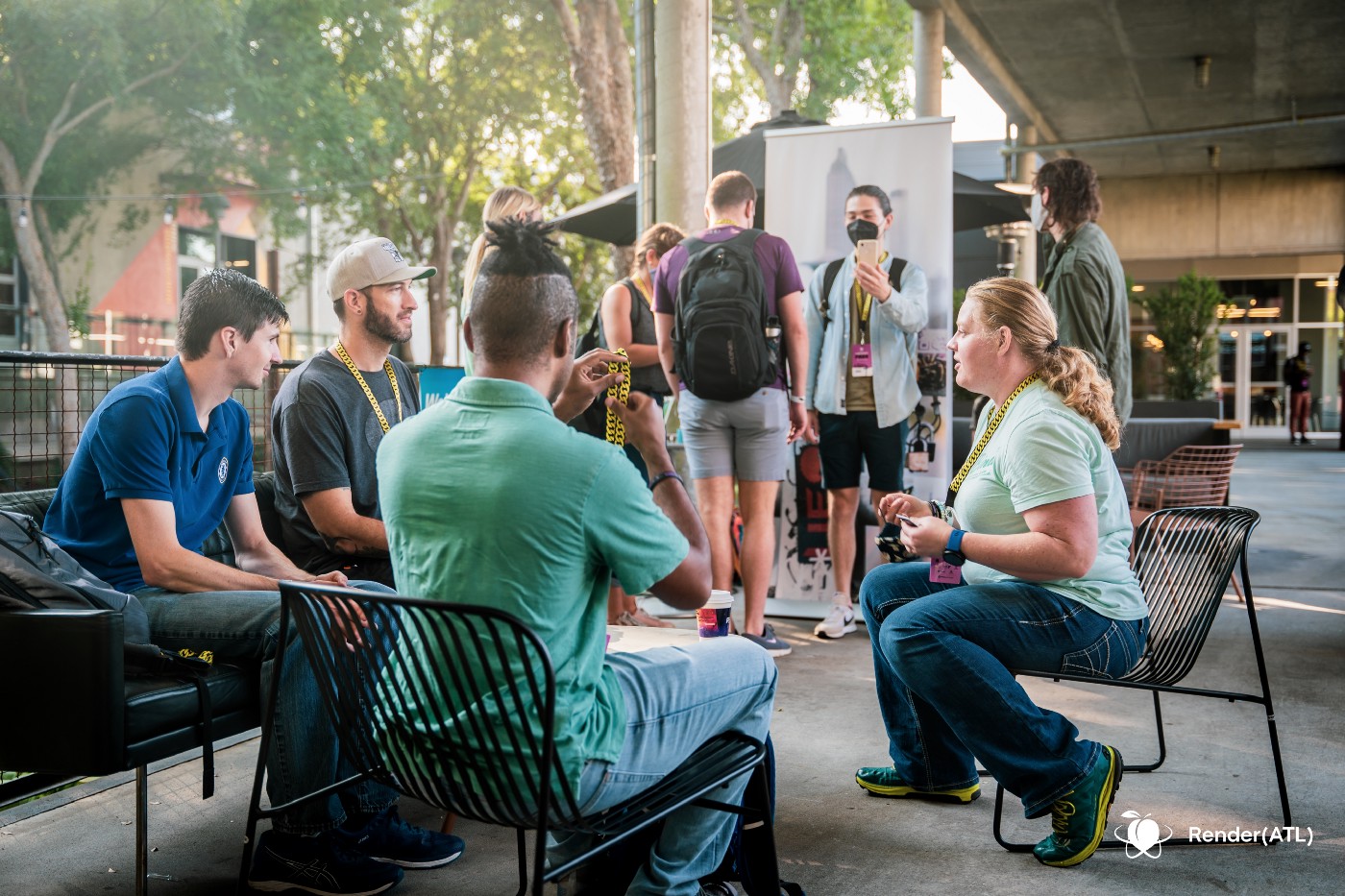 Jenn, working the magic with a group of attendees — background, a group of folks interested in slappies

As you can imagine, we very rapidly became a point of contact for a lot of attendees. We also had a hiring poster behind us, so anyone waiting to get their picture taken could quickly snap a picture of our QR code to check out job listings. Several of the folks who came up were speakers themselves — Justin Samuels, the organizer of the conference, even came through to get a photo. 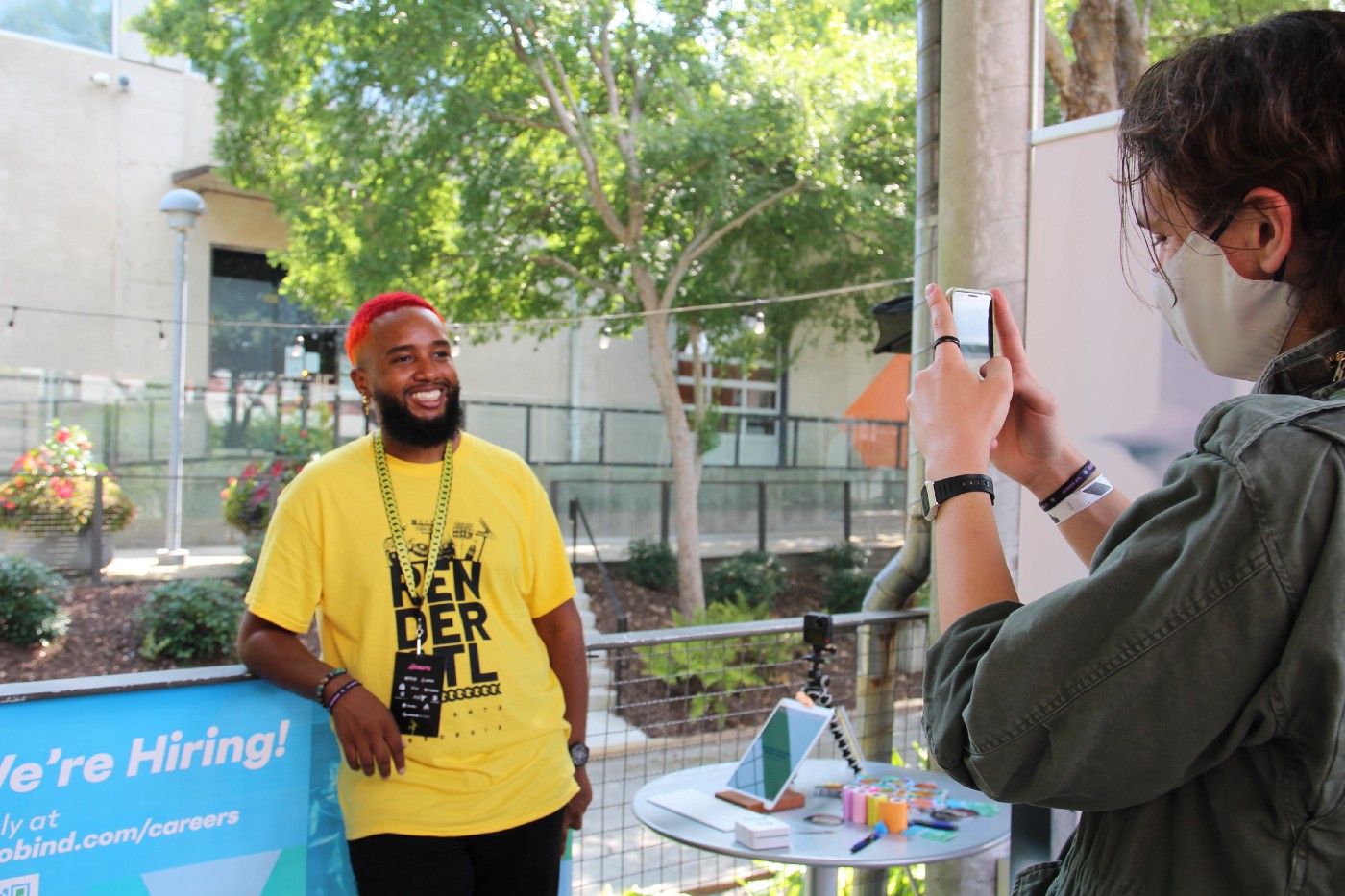 Justin, organizer of RenderATL, posing for his slappy photo

The other thing about setting up a photo booth this way is — you have material evidence that people took pictures at your booth, which encourages everyone else to take photos too. One of the speakers even explained to us that, as a result of our booth, he would often come up to remind himself of people’s names because he could match their faces to names thanks to the slappies they left. 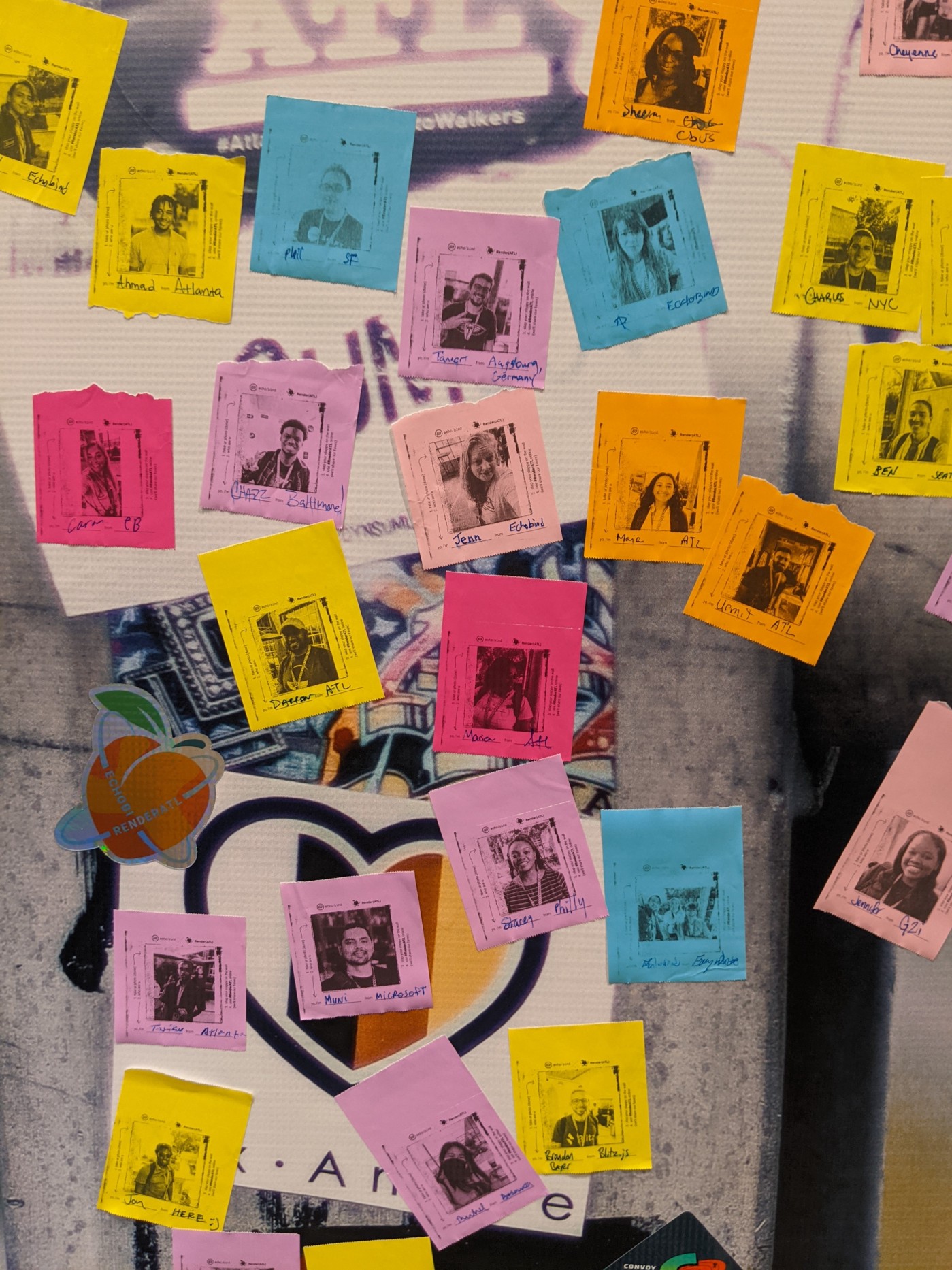 At the end of the conference, we were left with a genuinely cool piece of interactive art that captured a lot of what the conference was like: charismatic, upbeat, cutting edge, vibrant, and genuinely fun — in a way that actually reflects the culture of Atlanta.

We thought about what we should do with it for a minute — and then we concluded that the best person to take the finished mural with them was Justin himself, the creator of RenderATL: a memento to an excellent first conference, with pictures of so many of the people who attended. 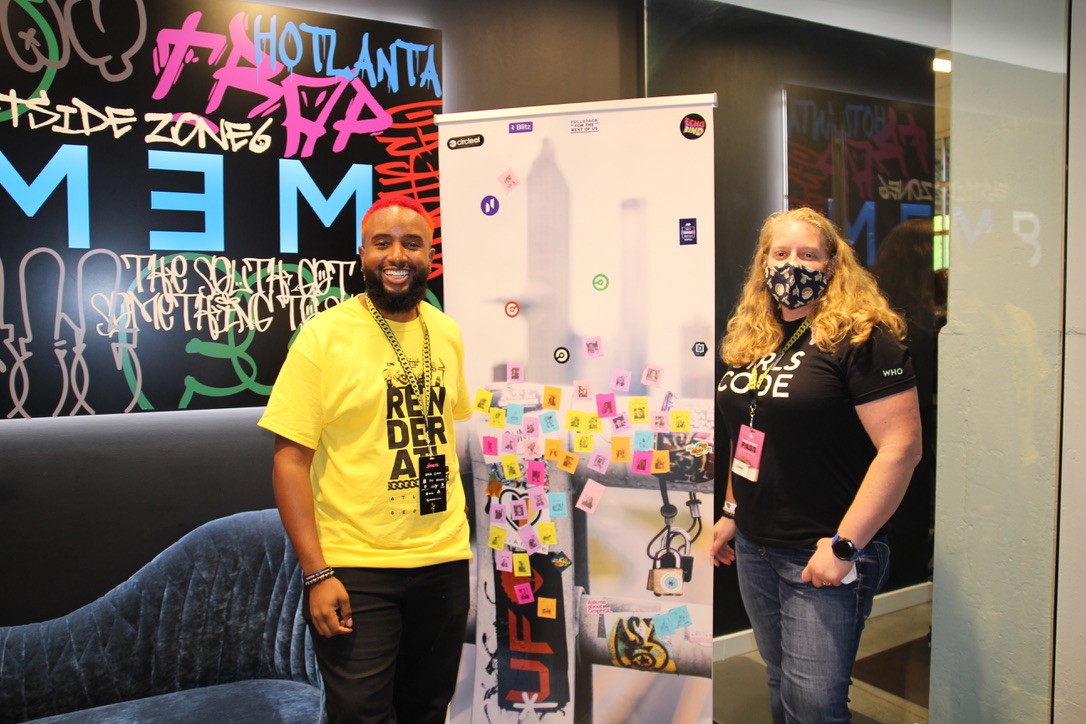 Justin with Jenn and the completed mural, at the front of The Gathering Spot, where the conference was held

Not only was the booth a success, but the whole conference was also. Engaging with so many people, we picked up a bunch of new contacts and potential hires, put our names on a lot of people’s radars as a creative and fun agency, and we got to enjoy ourselves. RenderATL is happening again, and beyond that, it’s happening in several new cities across the country — and you can bet we’ll be there again next round.