Look Deeper into the Look and Feel A Brief History of Design 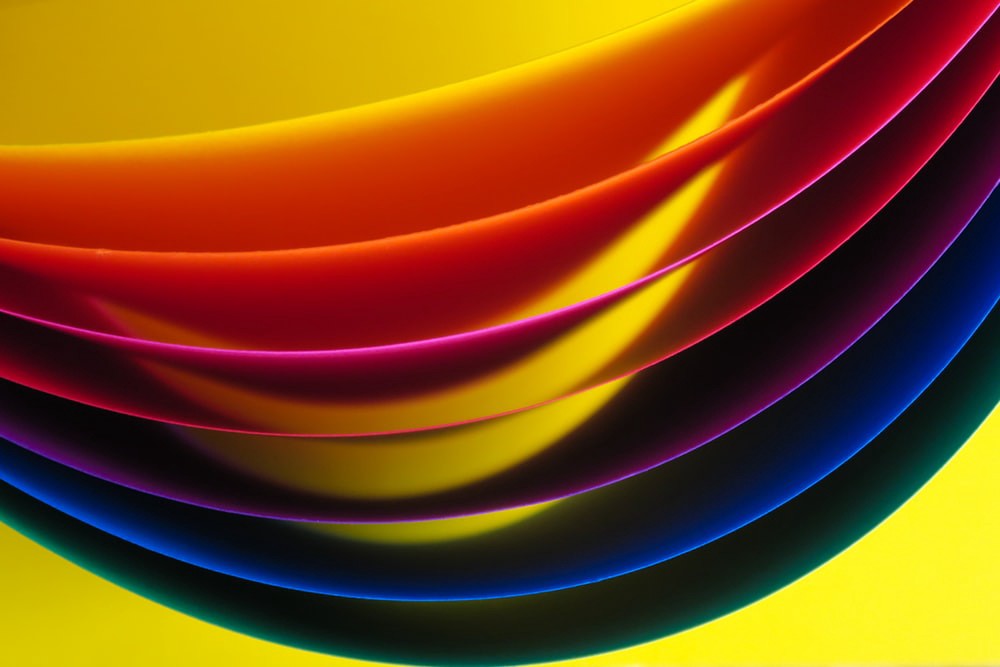 The Composition of Design

Design is comprised of many things but fundamentally it is about problem-solving and communication. It is a non-linear, iterative, analytical, creative and critical thinking process. A process used to craft solutions to problems and communicate them in ways people can comprehend, use and enjoy. To get the most out of design you have to look deeper into the aesthetics or the ‘look and feel’. Because the resulting aesthetic is based on a trail of logical and intentional decision making, not whimsical expression. It’s used to reinforce, inform and support how the design is supposed to work. And what it’s trying to communicate. It is a piece of design, not design in and of itself.

Steve Jobs, co-founder of Apple is recognized as one of the greatest minds, entrepreneurs, and innovators in the 20th and 21st century and had much to say on the topic of design. He was noted saying that:

‘Design is not just what it looks like and feels like. Design is how it works’. — Steve Jobs

And Even though this is not a complete definition, if such a thing even exists, it illustrates that Jobs understood there was much more to design and leveraged that deeper understanding to his advantage. But what does design mean? If you ask 10 people, you will get 10 slightly different but equally valid definitions and here is why.

Design is a word whose roots go back thousands of years. It spans and has influence from several industries. And it has different meanings and describes a discipline, a process, and a thing. People use it to mean a drawing, sketch, object, blueprint, plan, goal, objective, purpose and intention. This adds to the confusion of the meaning of the true meaning of design. But an interesting grouping has emerged from all these synonyms.

Looking at these words, we can group them into three categories. Objects, intentions, and plans. So, if we combine this with our earlier statement about design, we could say that —

‘Design results in some object with intent or intentions that we plan, which is then communicated to users in a way they can comprehend, use and enjoy’.

This is yet another definition of what design means. But I will try to explain why I think this is a valid description. But first, let's walk through a brief history of design. It's important to understand how we got to where we are today. I wish I could go into extreme detail but that is a book within itself. So, I will skim the history and pull out some details.

The roots of Design span over 40,000 years. As long as humans have been in existence we have been solving problems and creating solutions. We started with Petroglyphs, then Hieroglyphs and Cuneiform, using symbols, elements, and objects to communicate intent and meaning.

Those were the early forms of communications that over time evolved from pictures and symbols to markings and were combined with Latin and Greek into the alphabet we know today. But at the time these were carved into stone and clay. Fast forward through many years of innovation we went from stone to clay, then papyrus, parchment, paper and digital. Let’s pause on the revolution of paper.

Paper is credited to be have been invented in China around 200CE by Cai Lun. Another sizeable invention in China at the time was ‘woodblock’ printing. Which allowed impressions to be printed into the paper. Prior to this everything was done by hand. Fast forward through years of innovation, we ushered in woodblock printing, moveable type, metal-based printing, manual printing machines, steam-powered printing, rotary, inkjet, offset printing, screen printing, 3D printing and digital to name a few.

Printing was the gateway to the first information superhighway pre-internet which were books, magazines, and newspapers. Printing allowed for information to be mass-produced at high speeds and then distributed. Even though printing was influential, the result was repeatable, static, and uniform content. But there was a group creating, expressive, dynamic content, what people would call the artist.

Artists continued to evolve the symbol, pictures and illustrative side of our over 40,000-year-old communication roots. Artists were doing things like Calligraphy and experimenting with and creating typefaces the precursor to Typography. Creating decorative letters. And studying, documenting, and illustrating the physical form and world. A notable point to mention here is the Renaissance. The Renaissance not only produced some of the most famous artists but inventors as well. After the Renaissance, we went through a few more periods, several movements, and the world wars.

One major period was the Industrial Revolution and so much happened during this time span. The word Graphic Design was coined. Posters started to be printed and combined with color and illustrative work and used for things from promoting goods to propaganda. All that the precursor to marketing and advertisement. The first assembly line was created by Ford. More expansive factories started to emerge, employing people to work with machines. Products and luxury goods were starting to be mass-produced going from hand-made items to machine-made items.

People started to study these factories and their interaction with the workers. And systems started to be created like Fredrick Taylor’s “The principles of Scientific Management” and Toyota’s Production System. Two different ideas in systems but many believe them to be early forms of human-computer interaction studies.

The first portable camera was created by Kodak. The first GUI and personal computers were created. The radio and television were invented. So many things were created during this period. Industrial design was born as people studied the design material object for users. Henry Dreyfuss wrote ‘Designing for People’. The title says it all.

While industrial things were happening, so were the movements we mentioned. Movements such as Arts and crafts, Art Nevue, Constructivism, Dada, Surrealism, Modernism, Futurism, and De Stijl. All of which changed and influenced the Design of things from industrial, architecture to printed things. A major influence to note here before we move on is the Bauhaus School of Design in Germany. They took all of what these movements presented and turned them into many of the modern design principles still used to this day.

So much of the design influence at this time can still be felt and seen today in everything from furniture, architecture, products, graphic design, user interface, typography, and illustration. But the bigger influences and changes are on the way.

Into the 20th Century

As the 20th Century rolled so began the digital revolution, the change from analog to digital electronics and more modern computers. Steve Jobs lead Macintosh to created the first computer to have multiple fonts that were evenly spaced. Don Norman, electrical engineer, and cognitive scientist, the first-ever User Experience Architect joins Apple to design the new human-centered products. More advanced computers and software were built and that started digital design. Design now moved from much of the manual process and setup into digital desktop publishing.

The internet was created. A new medium and platform at the time. Whos underlining design model takes heavy influence from Graphic Design. We went through several years of innovation on the web from linked docs to webpages, HTML, CSS, Javascript, and Flash ubiquitous with interactive websites and animations on the web at the time. And a lot of great things happened but the platform was so still going through some growing pains and figuring out what it could be.

Then Steve Jobs and Apple hits us with another invention that would change. The iPhone. The iPhone was the start of ‘smart devices’. Even though it was not the first phone with internet access or even the first to be able to render a webpage. What it did was changed the way users would interact with the web and its content. It changed expectations. That was 2007. Fast forward through several years we have smart everything and everything has internet access and the user can access any content. Phones, Watches, Television, Regriators, Game Consoles are all things we have to design for in 2020. We have come a long way from Clay.

We only scratched the surface of our history up until now. Hopefully, you were able to see that our history of design, innovation, and communication is not a sequential pattern of things that overwrite one another but more of a global interconnected, overlapping, cross-pollinated history. Influence from all aspects of things over time from Egyptians, Scribes, Monks, Artists, Posters, Wars, Movements, Books, Phliopshers, Engineers, Business, Technology, Scientist, Products and everything in between. All with the same mission to Design, solve problems, build objects, and communicate things.

Design in 2020 is a combination of everything that we have learned over our 40,000-year history of design, products, business, and users. No longer are we just designing a Watch. It's a Smart Watch, with a heart sensor, GPS, and many other features. A Radio is now connected to the internet, it has voice controls, and knows the weather. A car is now an Electric car, that updates over the internet, with auto-drive, a 17-inch dashboard, and a mobile app. Users have access to all the mass-produced smart devices. Businesses are now global entities catering to diverse markets. And the distribution of content and products can happen in minutes to thousands if not millions of users. You get the idea.

Designing today has a lot of concerns and variables

Luckily we can look back at our history and what was learned over time to pull influence from it and use it as a springboard for innovation.

This may look like a daunting list but there are organizational approaches or mental models such as the one in from the book Elements of User Experience by Jessie James Garret that can be used to help you tame that list. 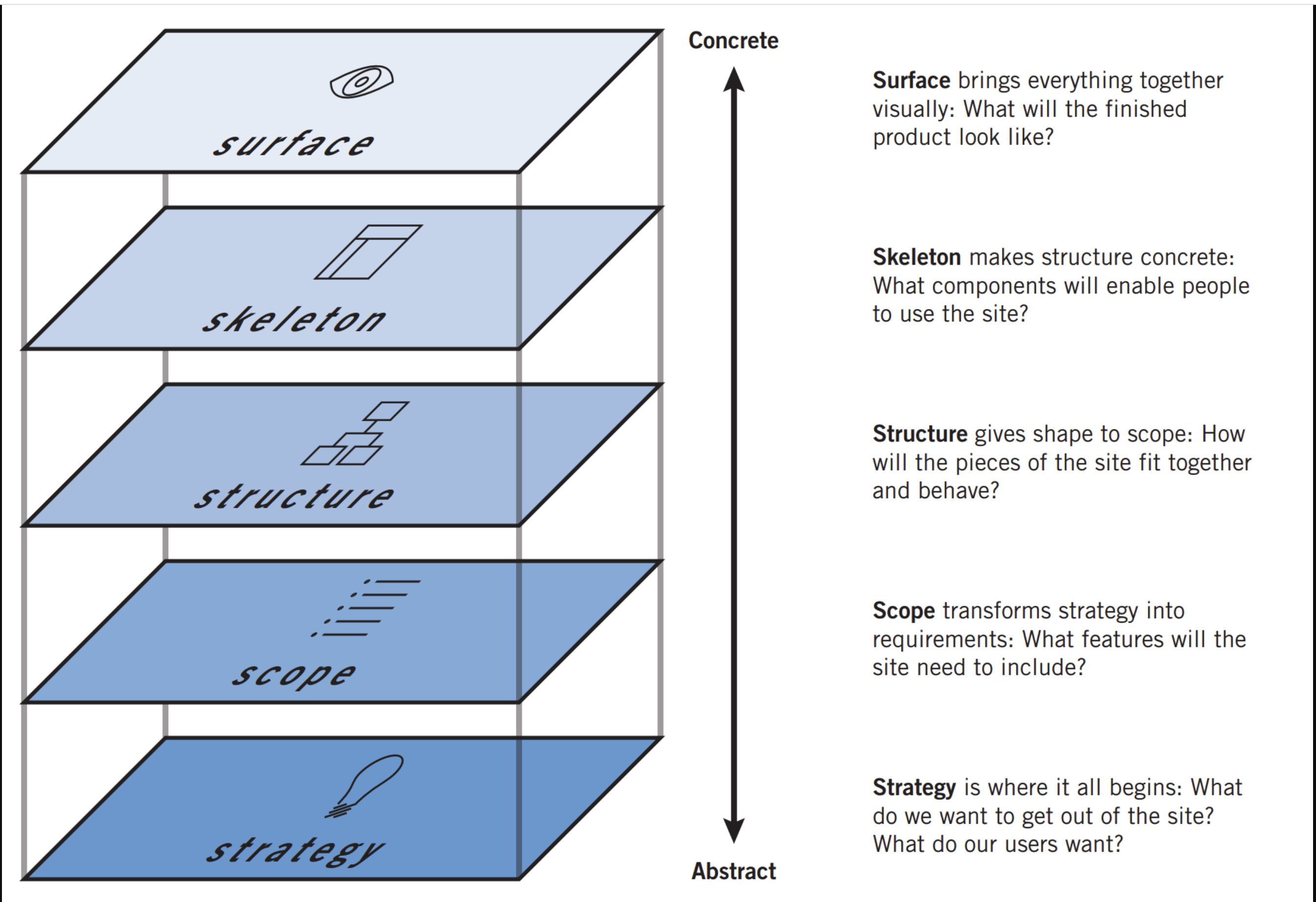 I hope this post was able to provoke some thought and get you thinking about what is behind the look and feel. The same way we started with simple shapes and elements so long ago we can use the same concept when breaking down even the biggest Design task in 2020. We just have to dig deeper.