There are a lot of good articles out there on how to level up your software engineering career. I’m going to focus on one: digging deeper. Digging deeper is the concept of being comfortable understanding what you use and how you use it. Let’s get to it.

When I first started, I had no clue what I was doing. My method of doing anything, especially in the early days of web development, was to just piece things together. Some HTML here, add a little bit of CSS (Blueprint anyone?) to make it look good and a sprinkle of jQuery. I’d download assets, add it to the project and then FTP it — done!

I didn’t dig into any of those libraries. This was my method:

I feel sorry for the people who had to maintain code from my early days. Who knows, perhaps they still are. It’s a spaghetti mess. I eventually learned to clean up my act and my code! Once I got out of freelancing and had opportunities to join formal engineering teams — I understood that it was necessary to think through solutions. ‍ I thought about maintenance, scaling, and code styling. This was my method:

That’s where I plateaued.

When I was working in Ember and working closely with folks on the core team, I was introduced to a novel concept: debugging internals. We would put a debugger and just step through the whole stack. I had never done this before! I thought it was crazy! I also thought it was the coolest thing in the world!

During that time — I found that the tools I was using were developed by other humans! Humans who had an idea and just wrote the code for it. Some of it was great, some of it was terrible.

Over the course of a year or so — I had developed some core knowledge about Ember that helped me:

This was my method:

How do you get here?

Don’t wait to get to this step! Start today!

I’m going to showcase an example. For this example, I’m going to dive into Apollo’s useQuery hook. I haven't used Apollo for almost six to seven months now, and I haven't dug into apollo-client before, so this is my first time.

Let’s say that for whatever reason my loading state isn’t working. I don’t know why my query works and the graphql playground is working as expected. I’ve looked at the docs several times and I’m stumped. What can I do? I can add a debugger at this line and step into what’s happening — that’s a great option.

I could also dive into the source code. This is what I’m going to do because I need to know whats going on to figure out what’s up. Keep in mind, I’ve never done this before this article.

Here’s what I do:

Let’s start by going to the repo: 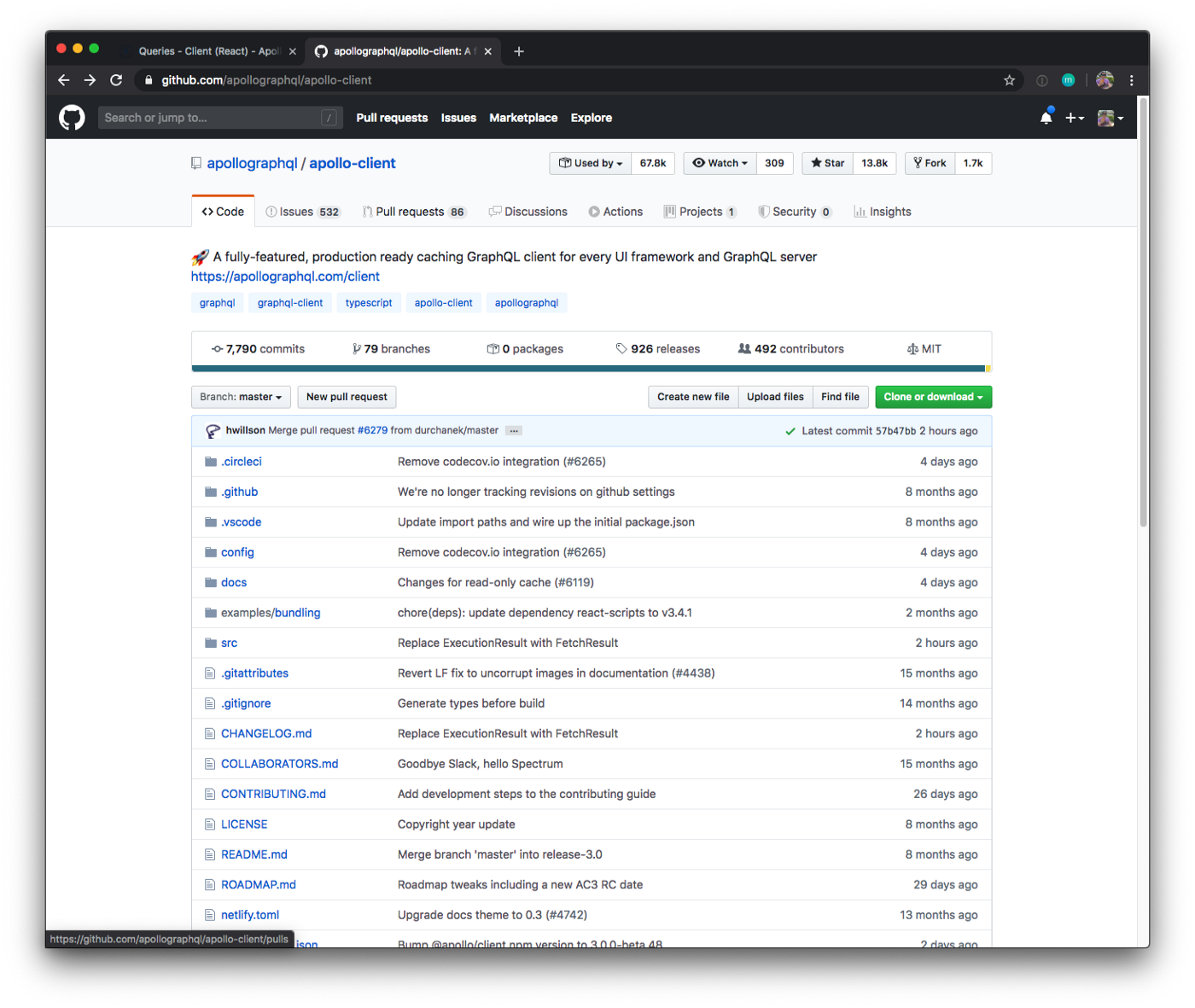 I’m going to search for useQuery, and luckily my second result is the test for this hook. I can look at the test, but I'm going to dive deeper. 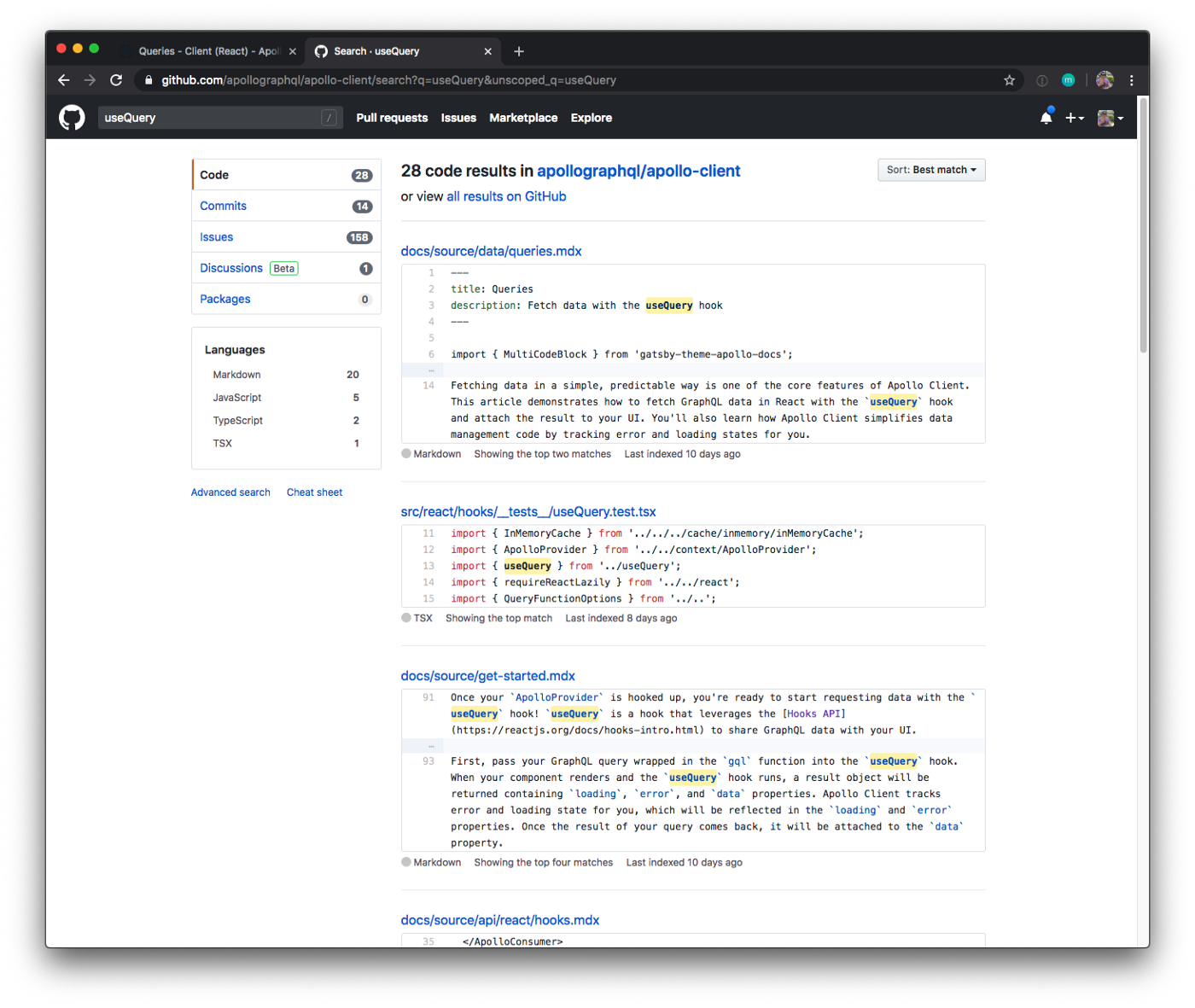 The test tells me where useQuery exists, so I'm going to go up one directory and check it out. 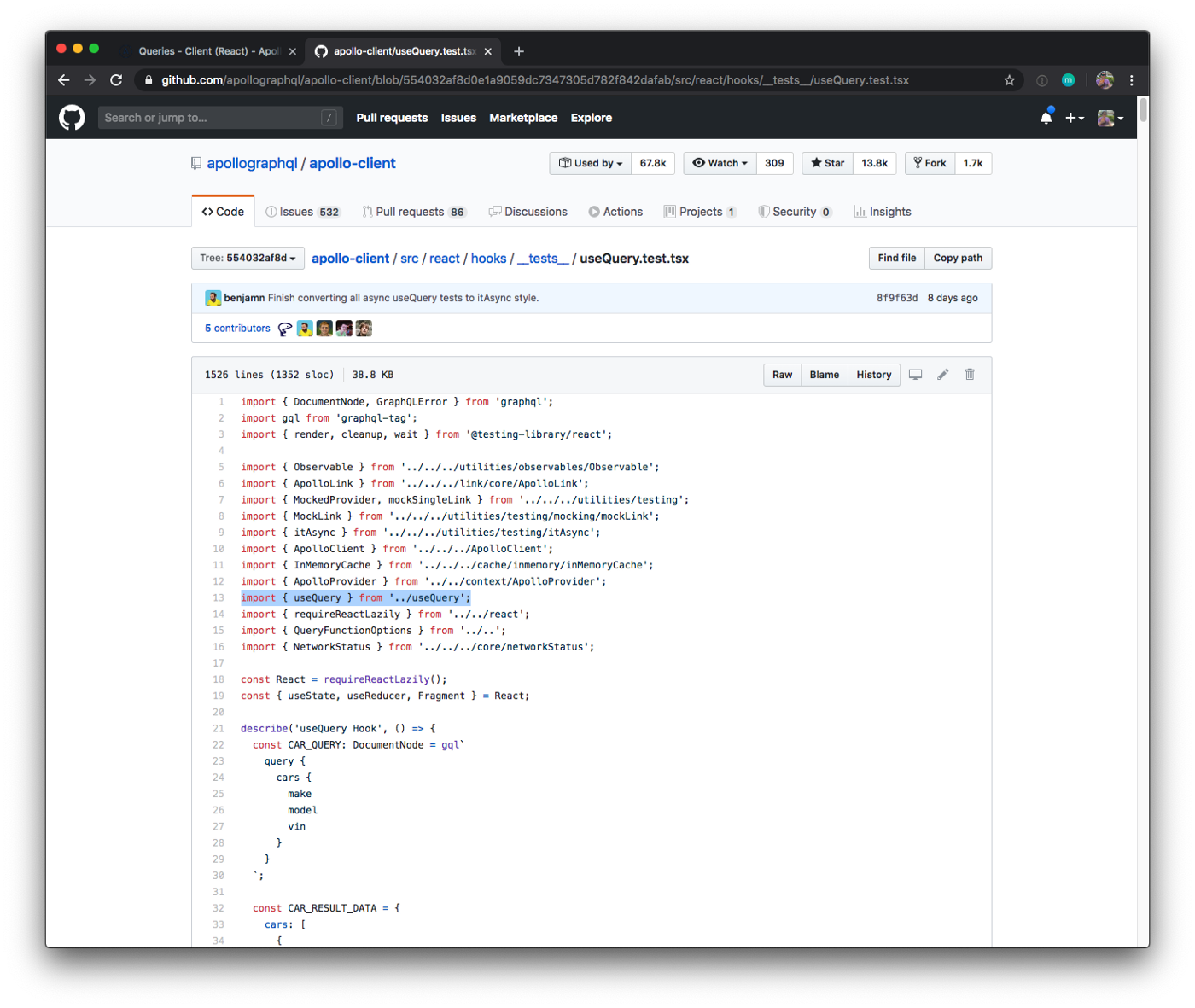 Ok cool, there it is — let’s click into useQuery.ts 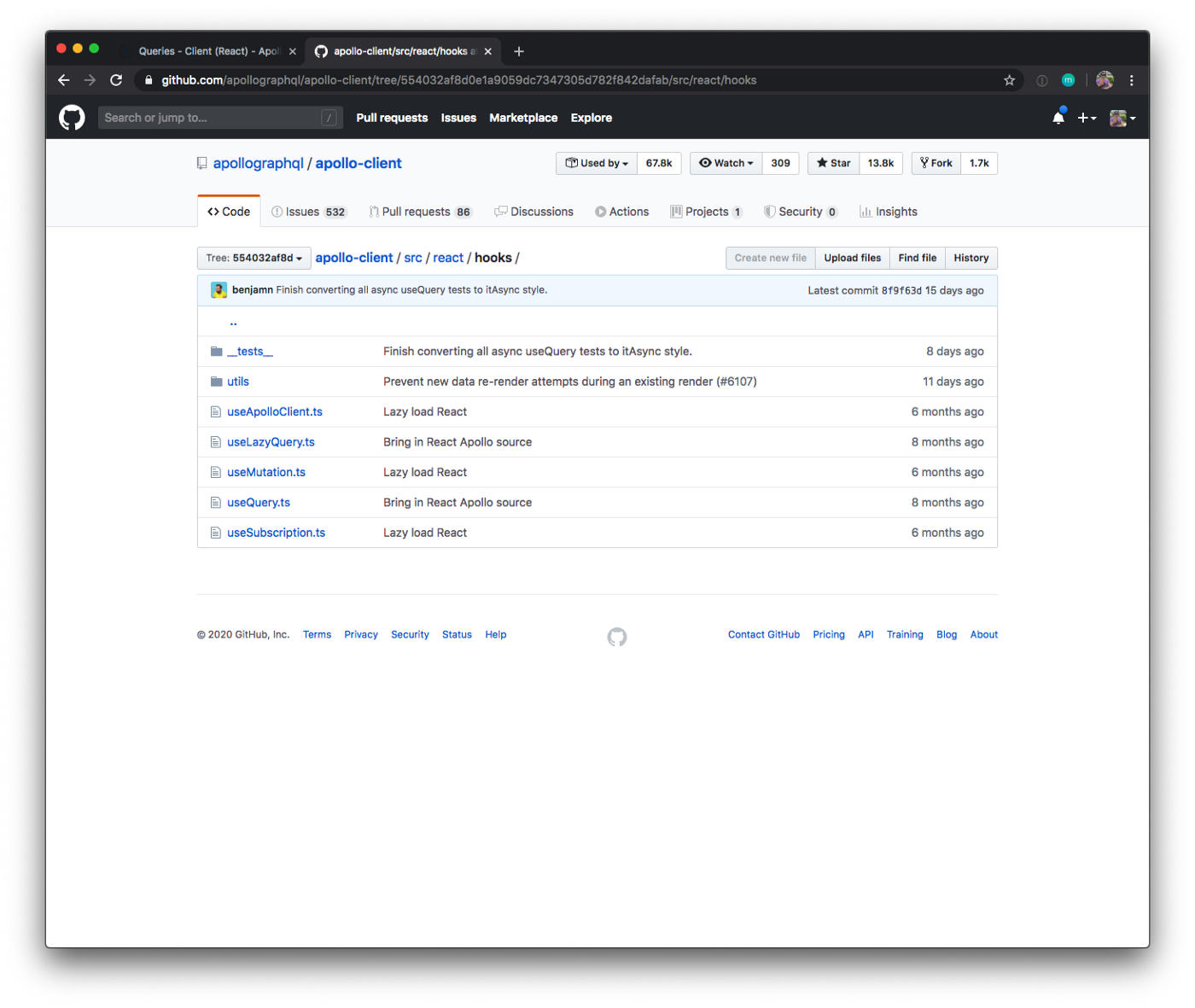 Alright! We’re looking at source code…but… there’s nothing here — what do I do? 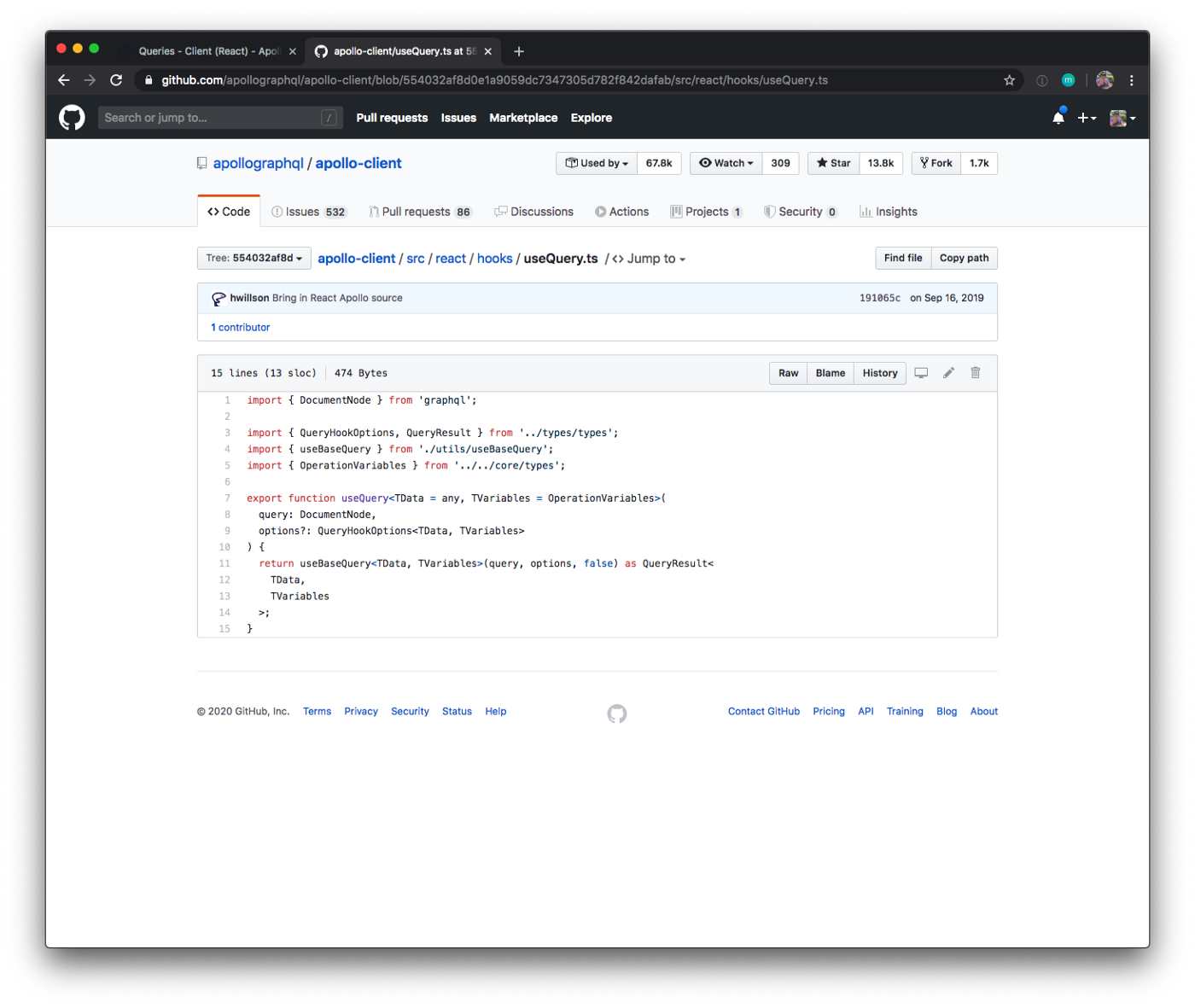 It looks like it’s using something called useBaseQuery, the import above shows it's in a utils directory - let's go to it. 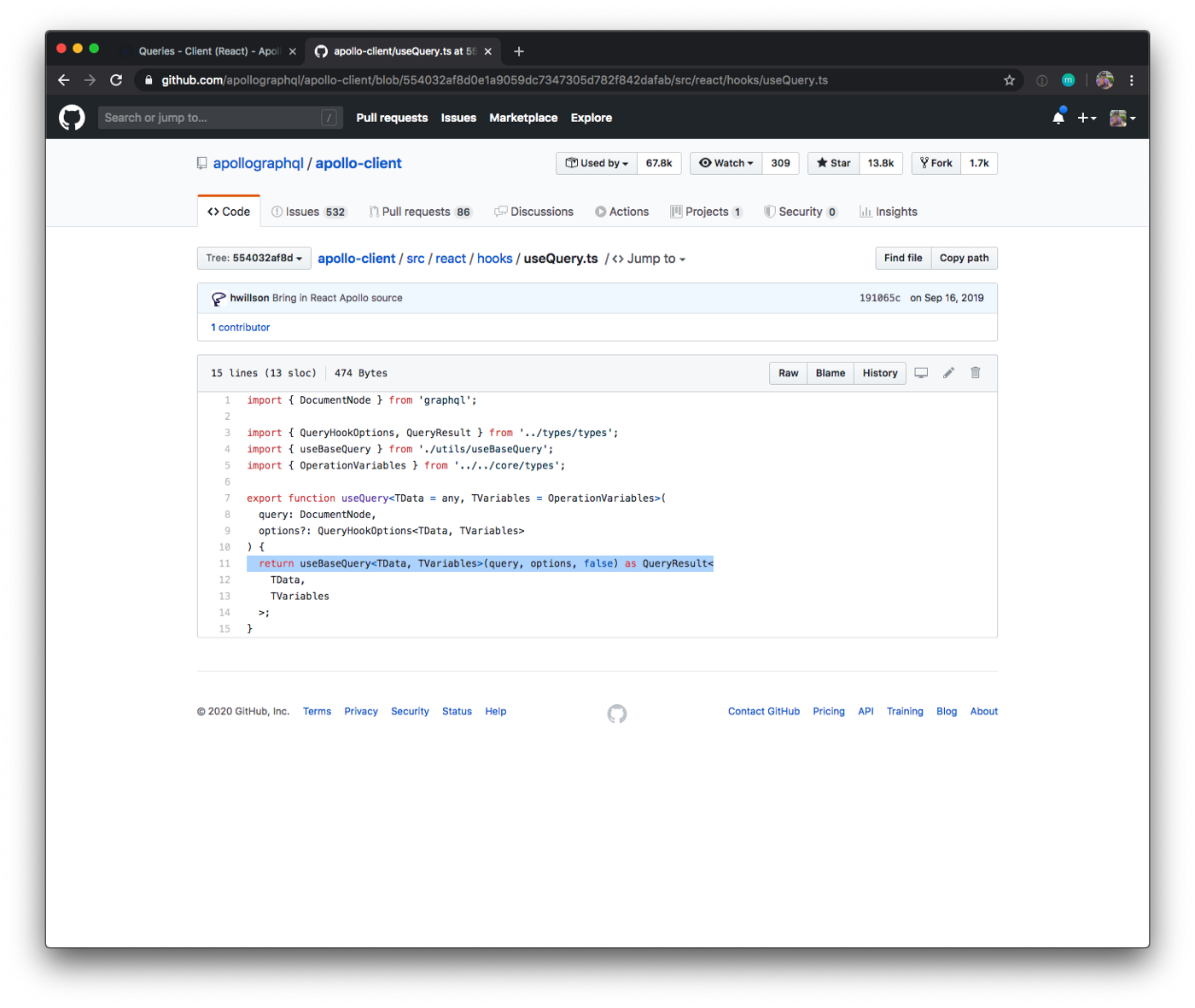 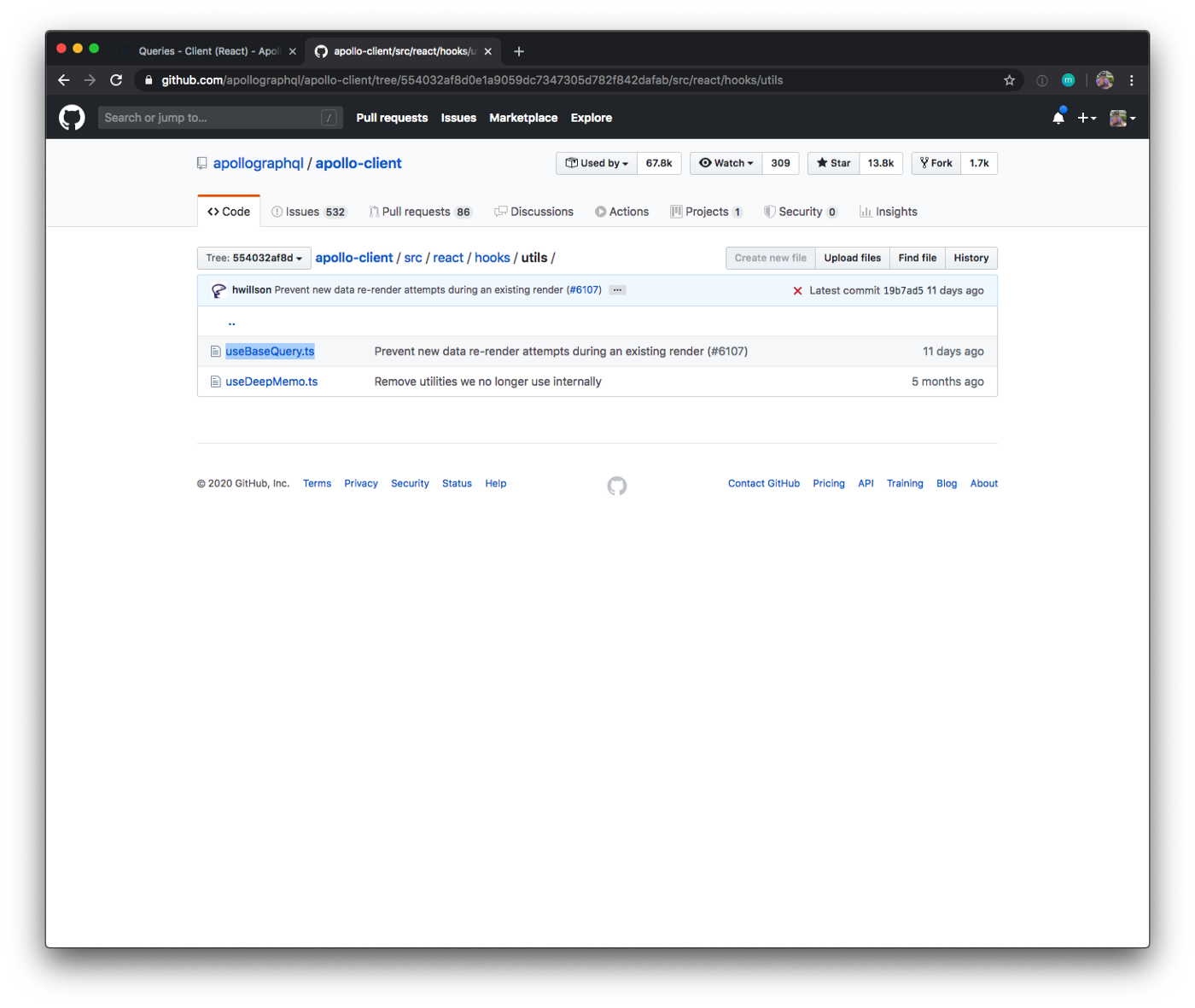 Ok. I’m digging through the file and I see something called queryResult.loading. I don't know what queryResult is so, let's see what it is... 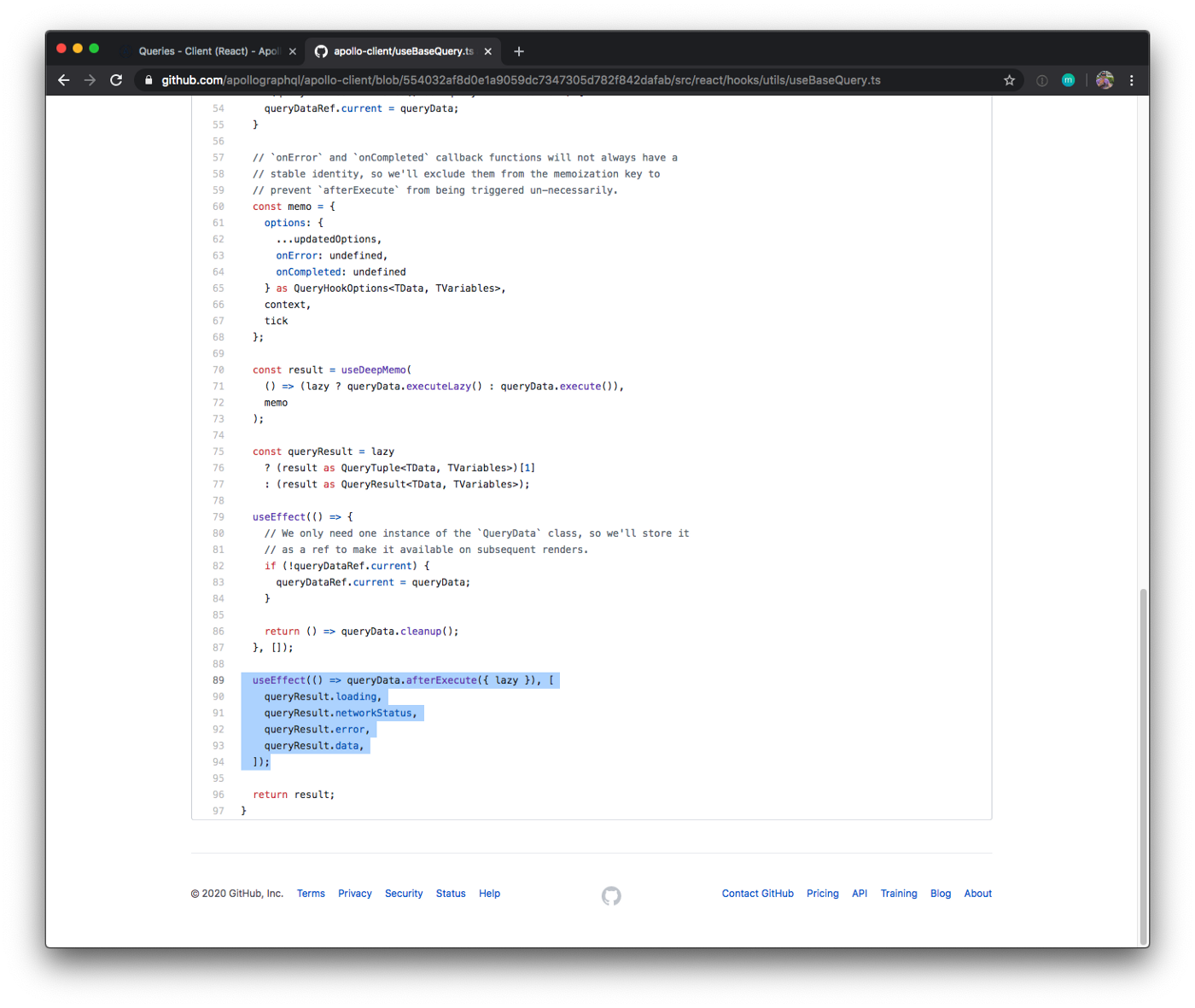 Ok, looks like it depends on if lazy is true or false. Since we didn't specify anything lazy about our hook as an option, I'm assuming it is the second one where we typecast it as QueryResult. 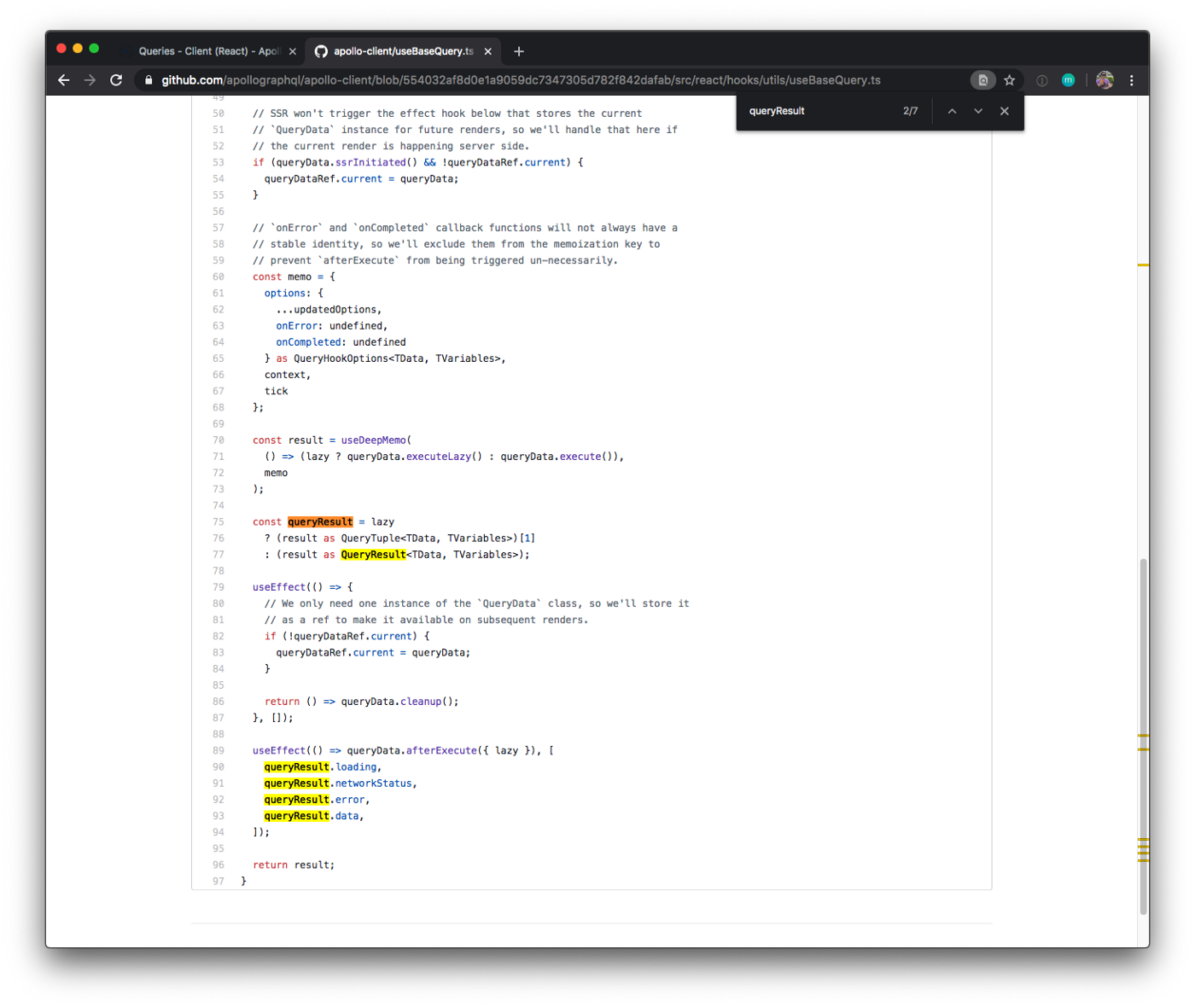 This is the line, I’m assuming we hit: 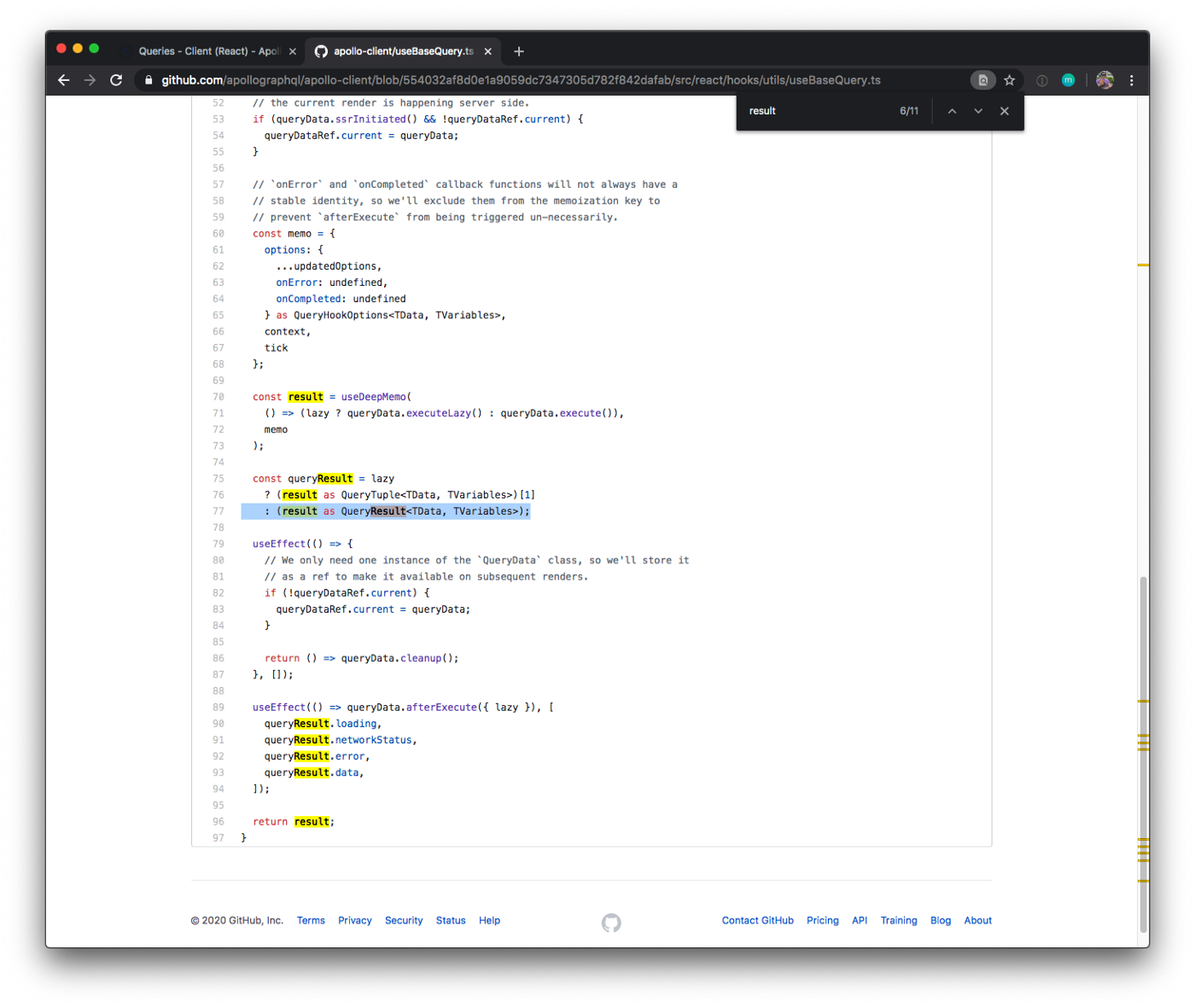 Regardless, whats result? Ah, ok it's above. 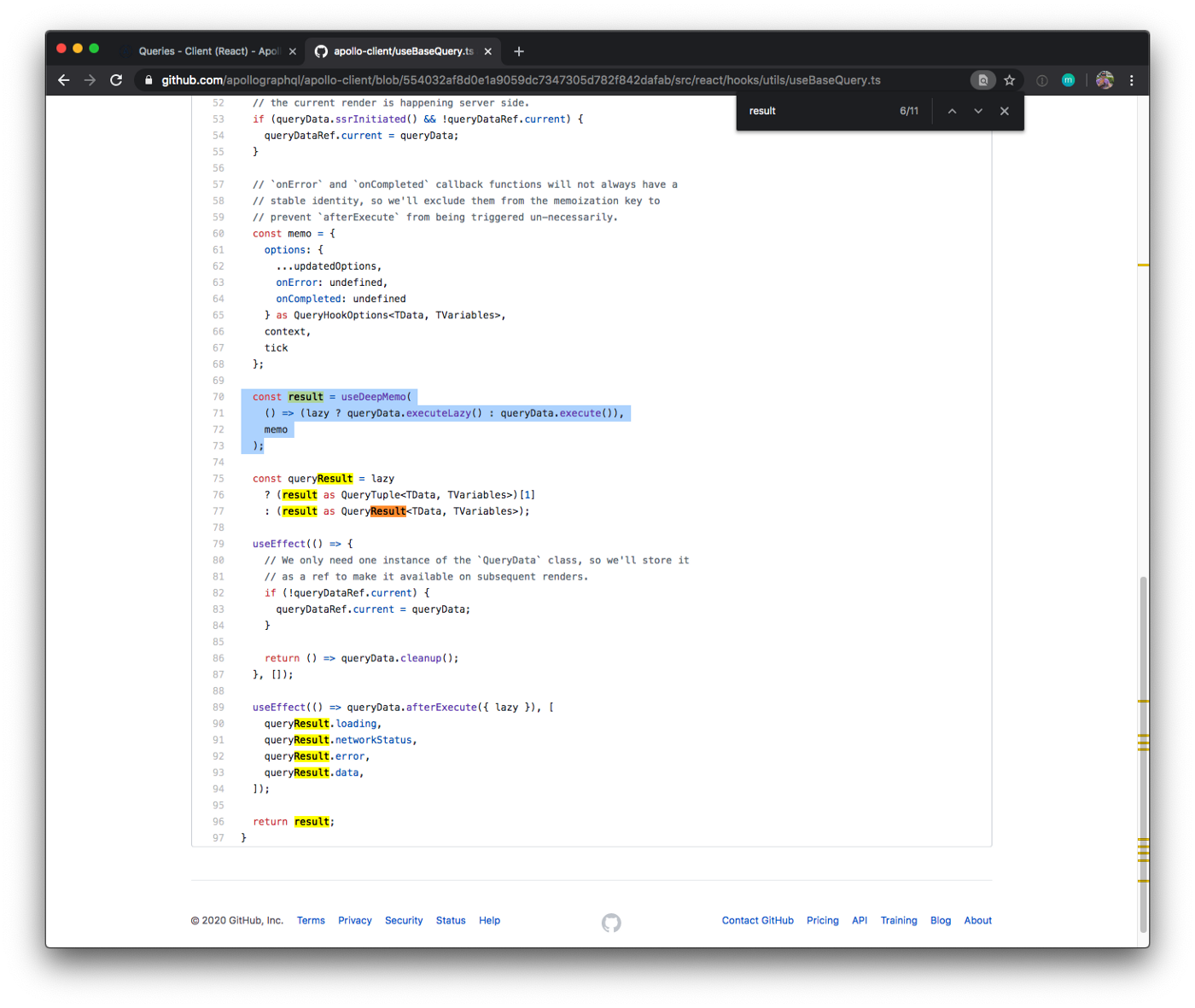 Ok so within this other hook is a call to executeLazy or just execute. 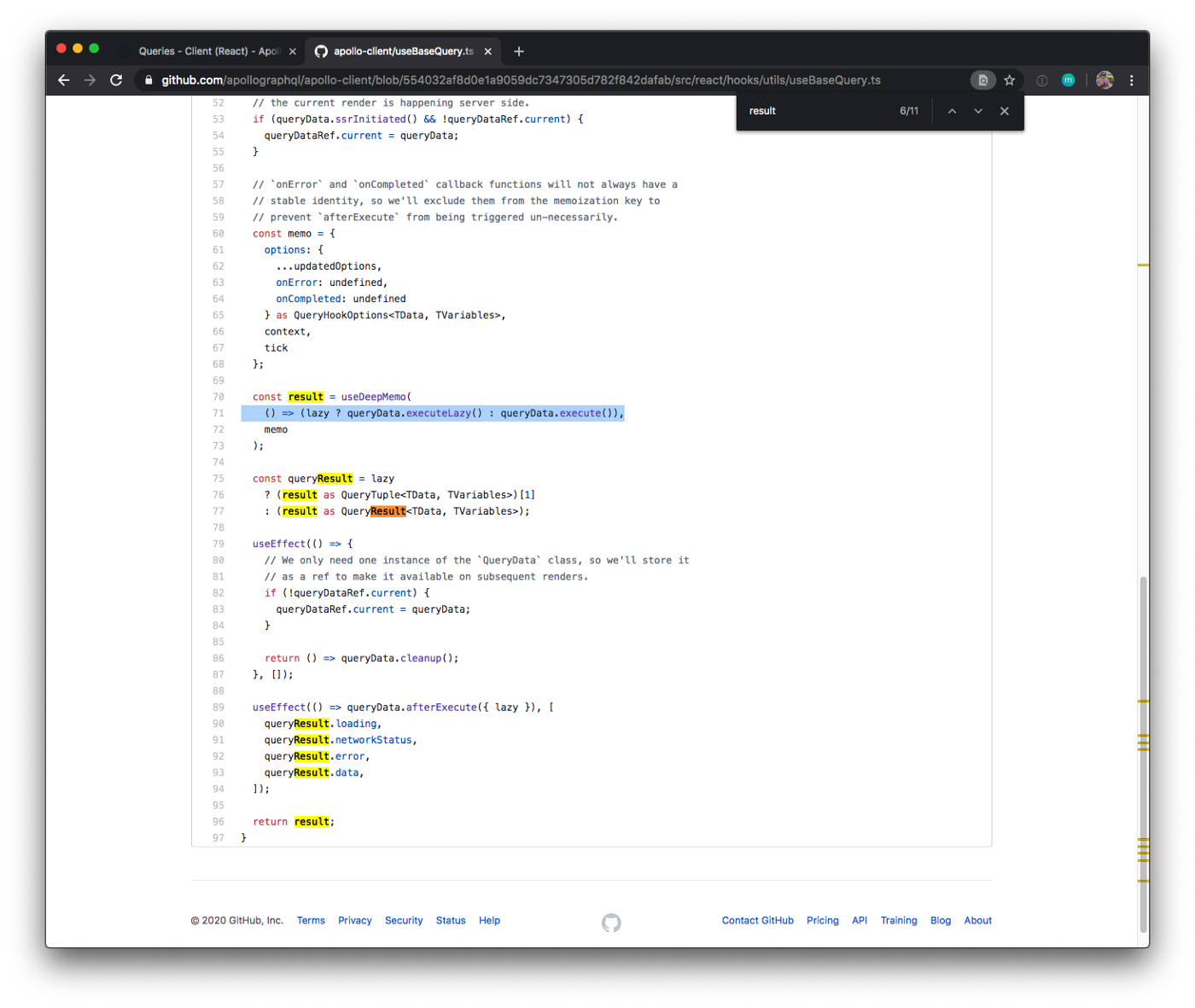 I’m going to assume where calling queryData.execute because I didn't specify lazy. But, what's queryData? 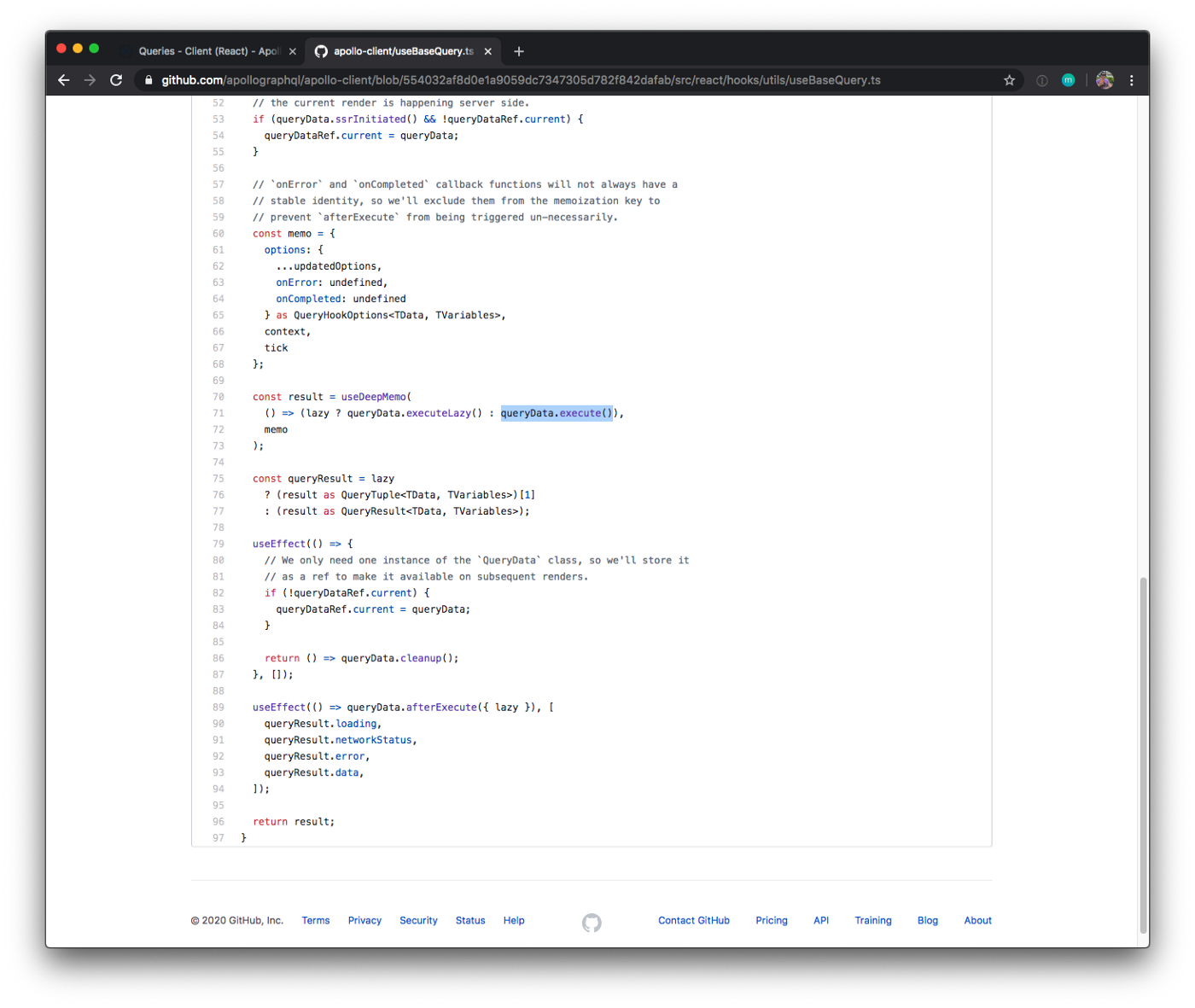 Nothing significant about loading here - it looks to be contained within this QueryData type. So let's dig deeper. 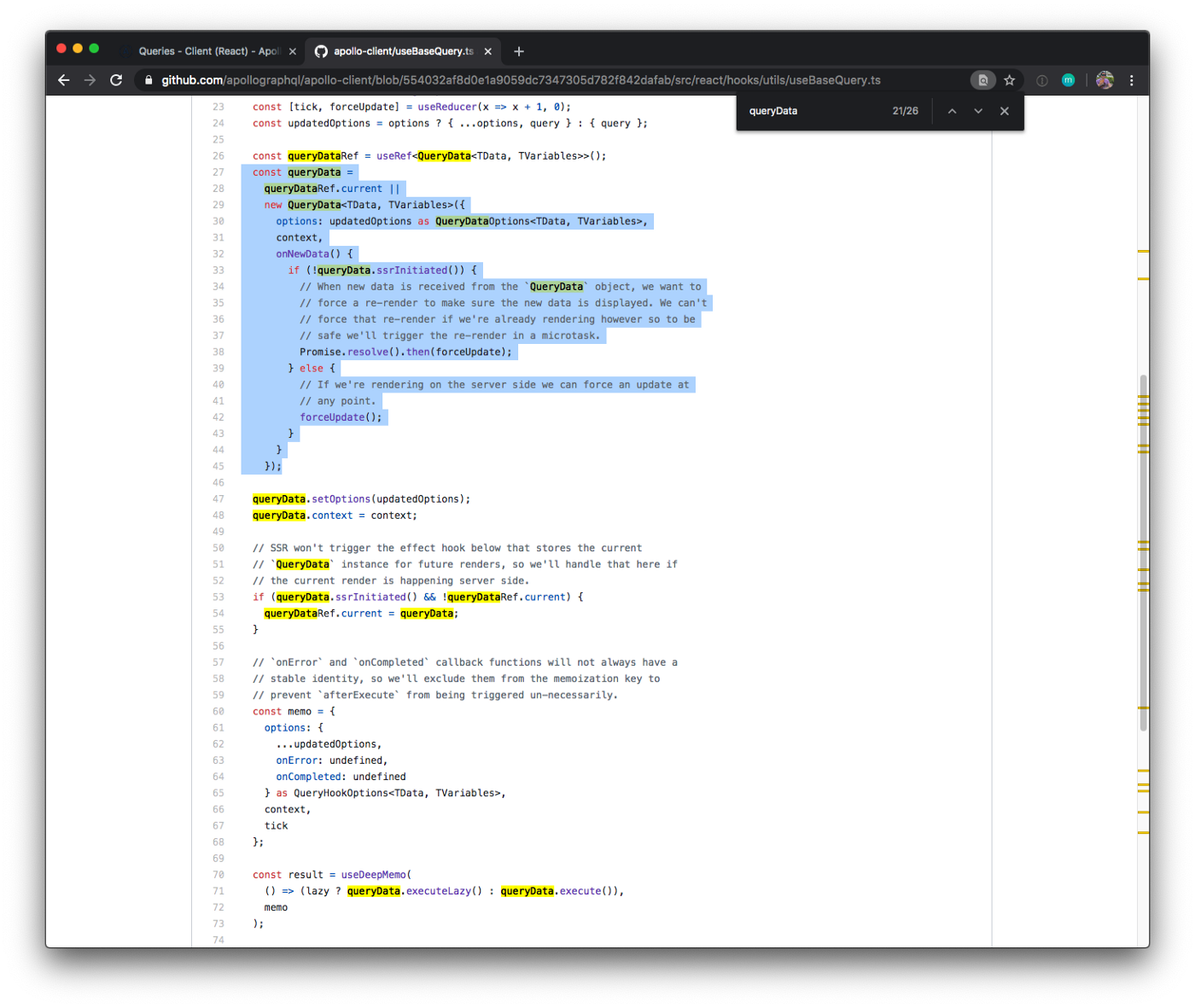 Looks like QueryData is being imported by two levels above. Let's go to it. 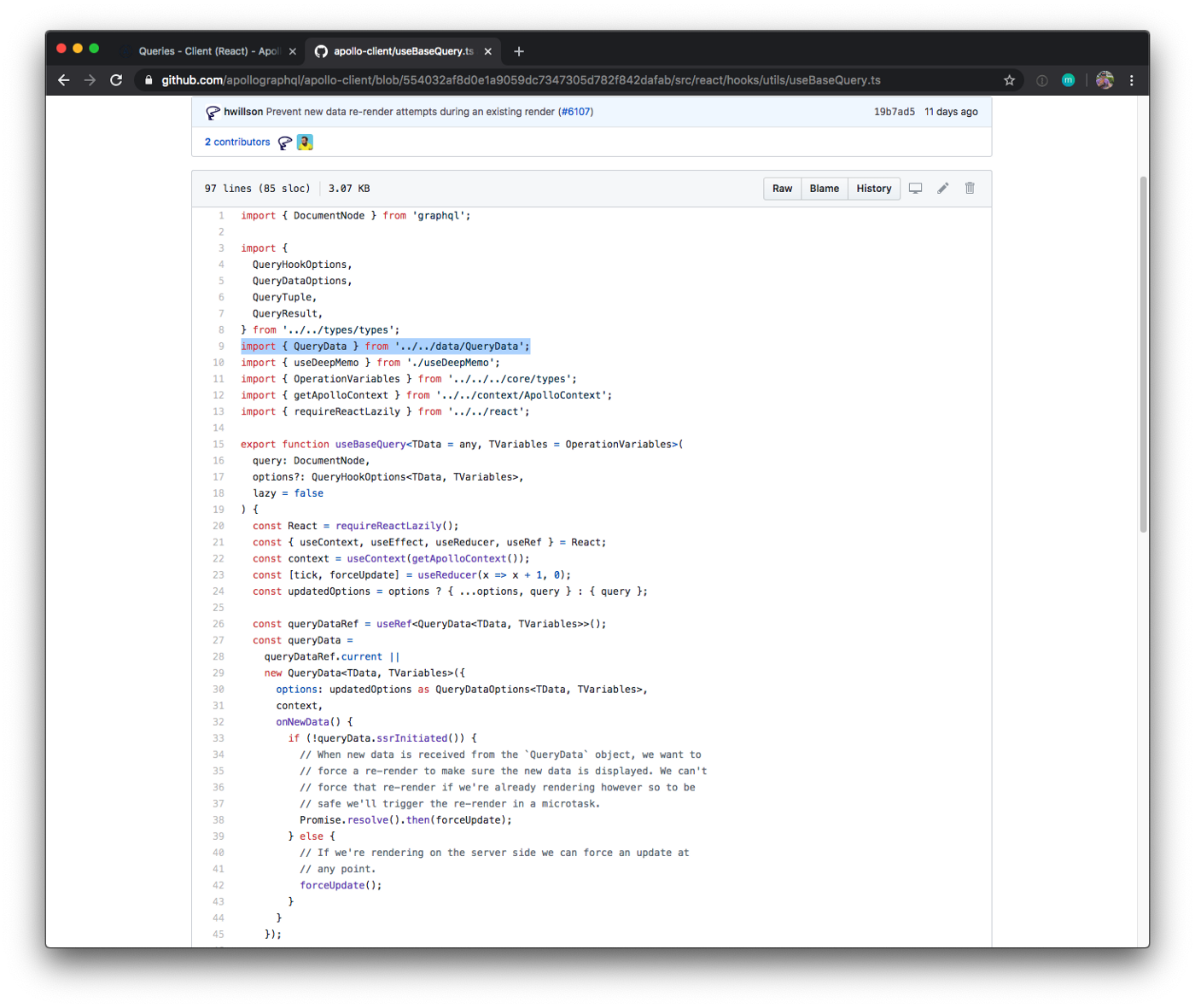 Found it! Let’s go into the data directory: 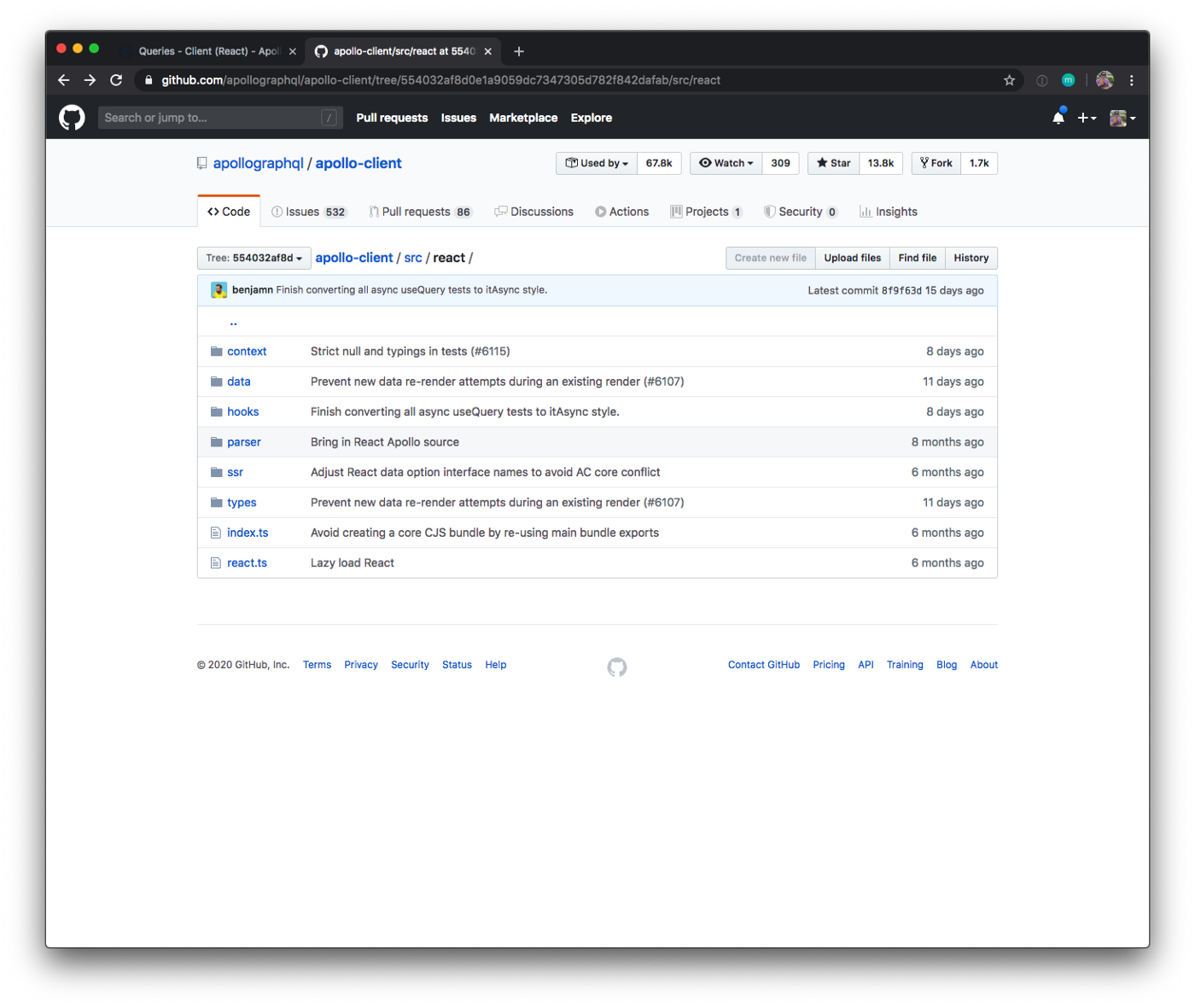 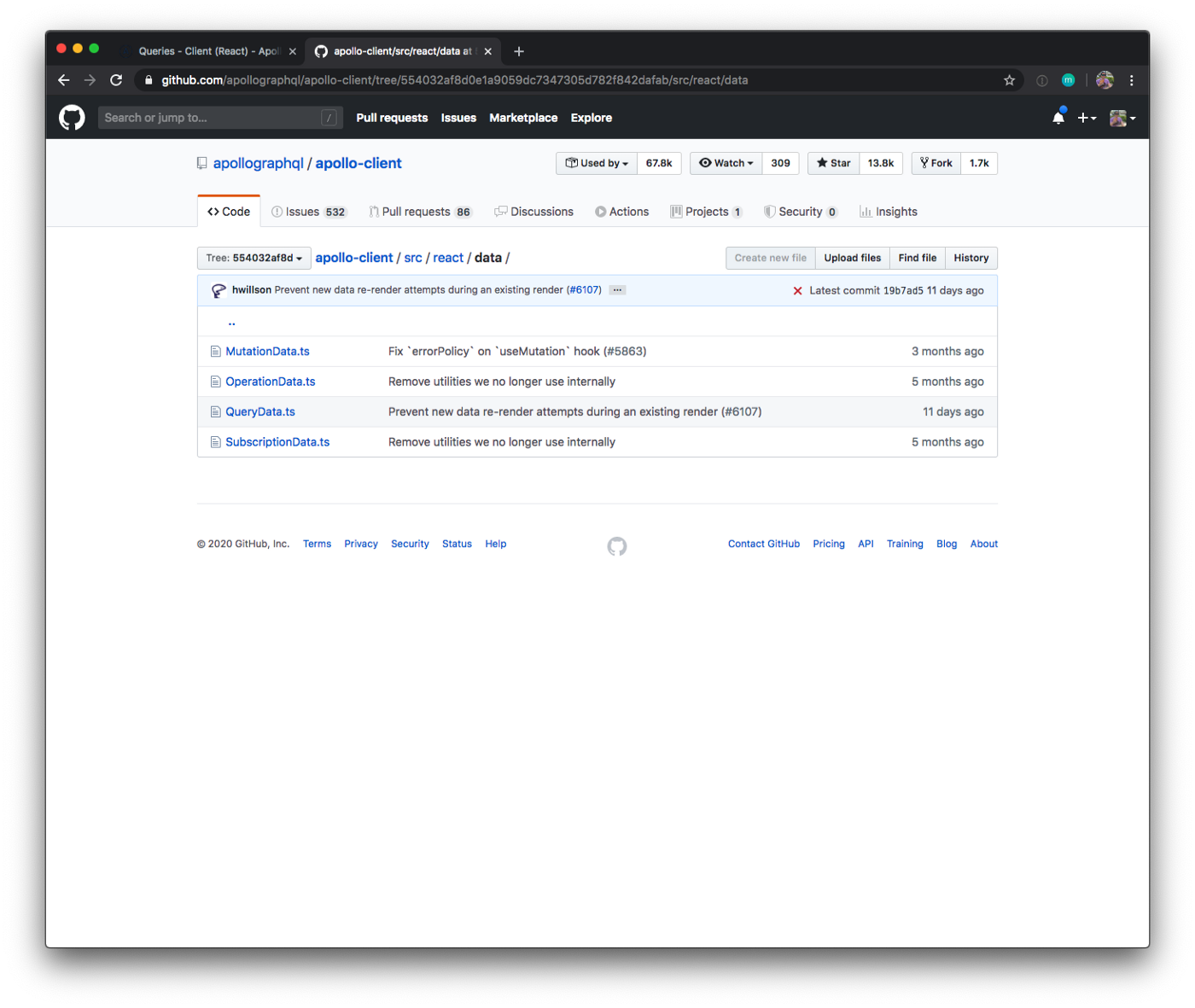 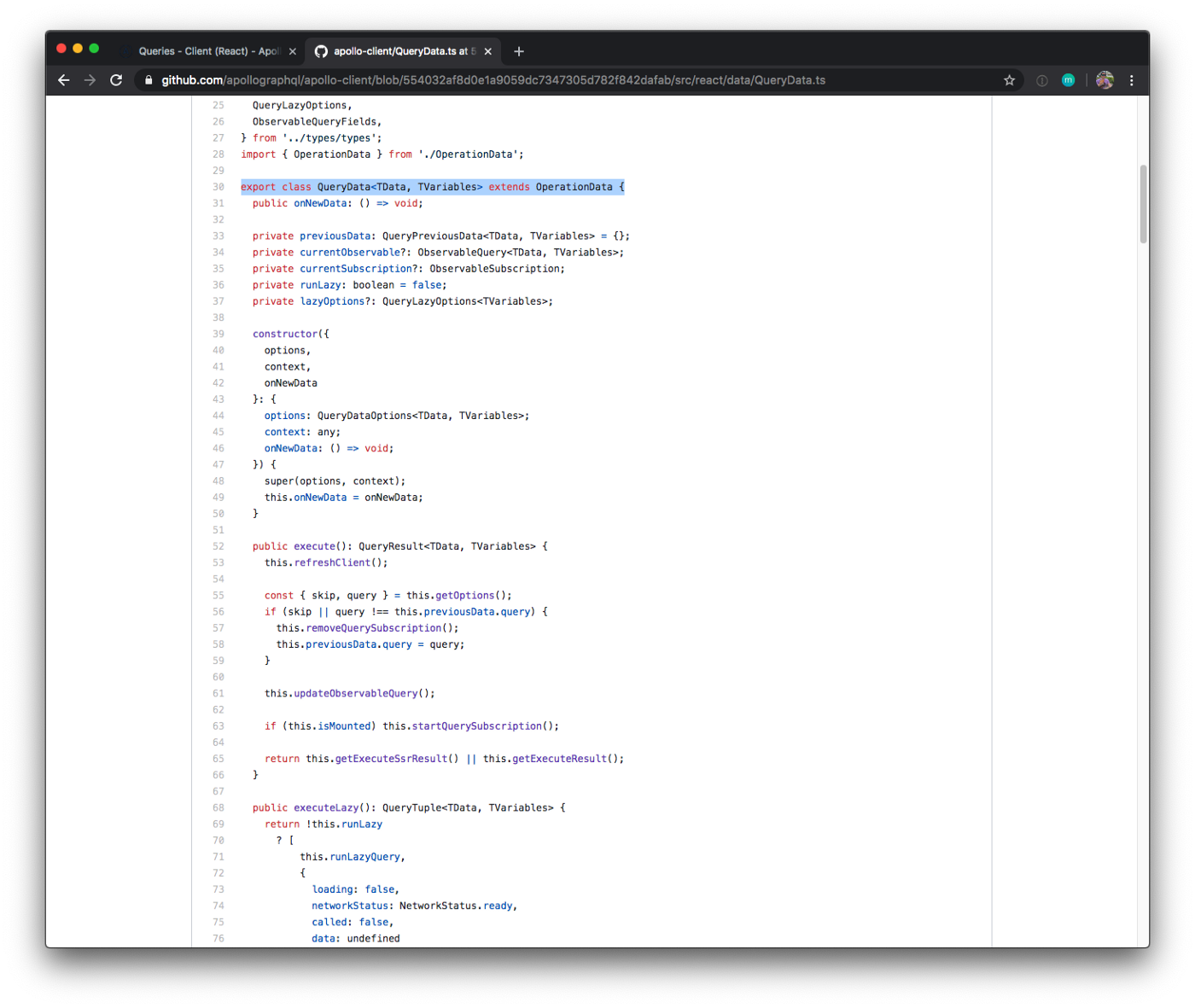 Found it! Let’s see what it does: 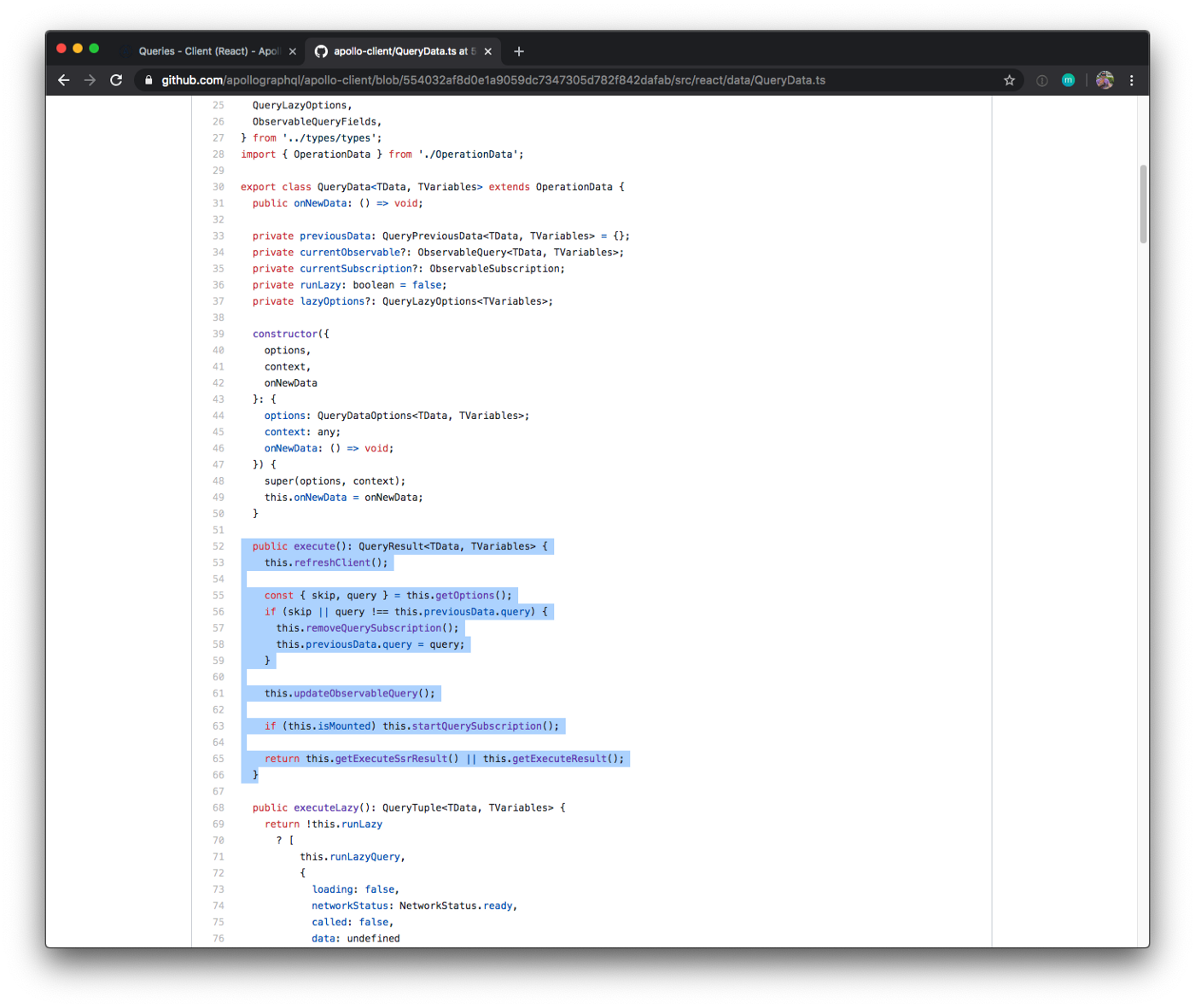 Ok, it seems to make a call to getExecuteSsrResult or getExecuteResult. Since we're not doing anything SSR related, I'm going to expect getExecuteResult is what gets called. Let's see what that does. 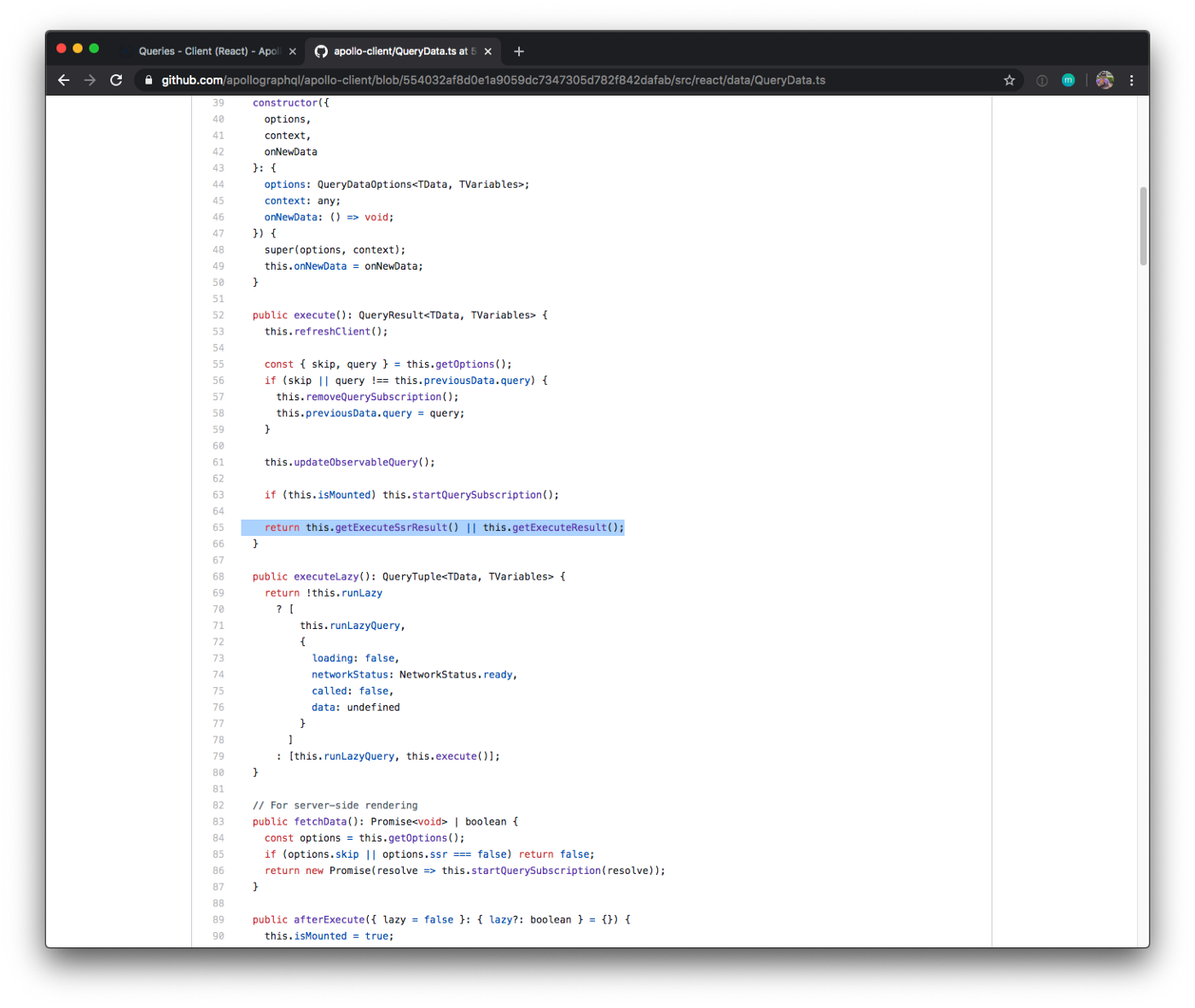 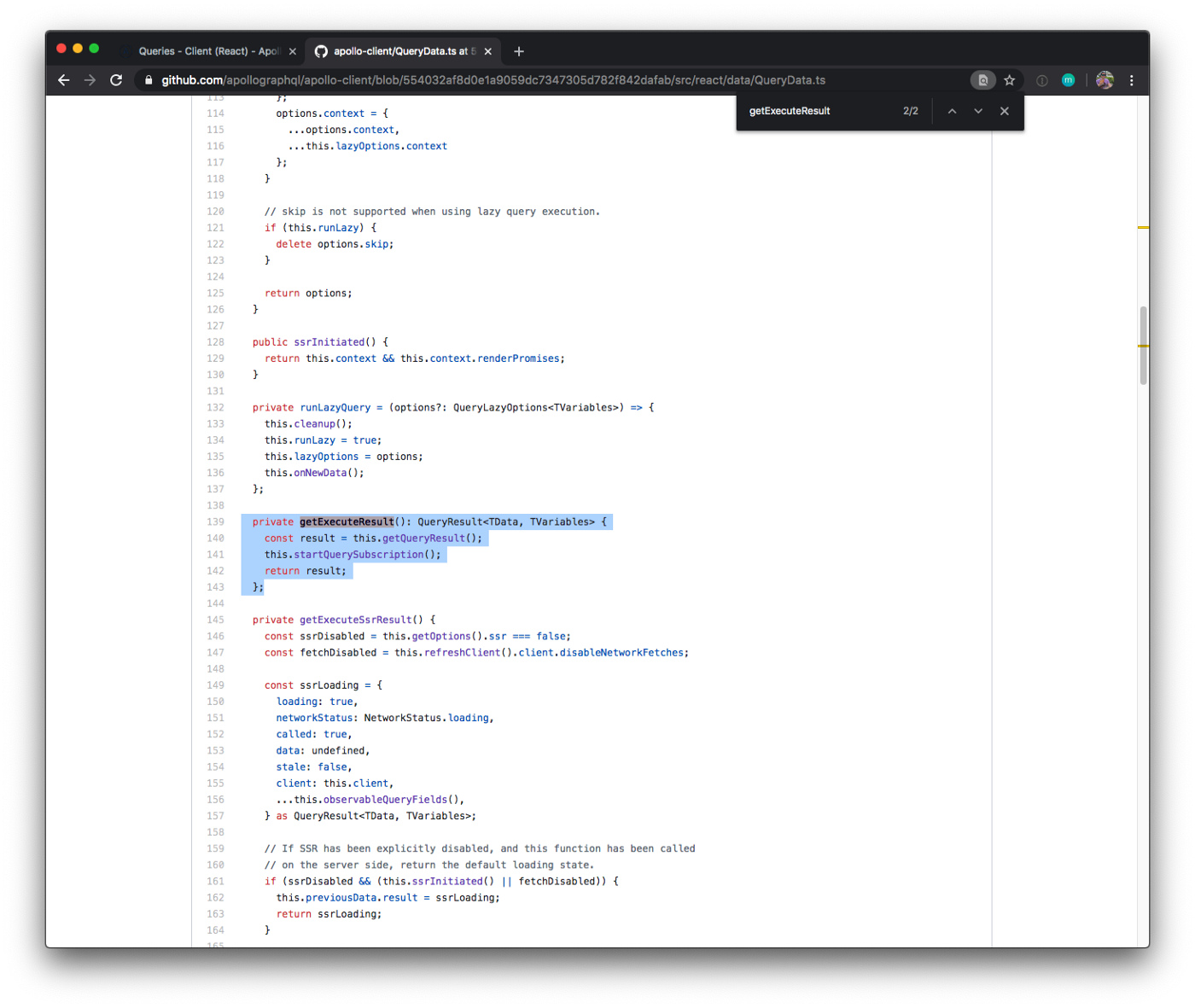 This function seems to call getQueryResult - ok, that definitely seems relevant! Let's see what it does. 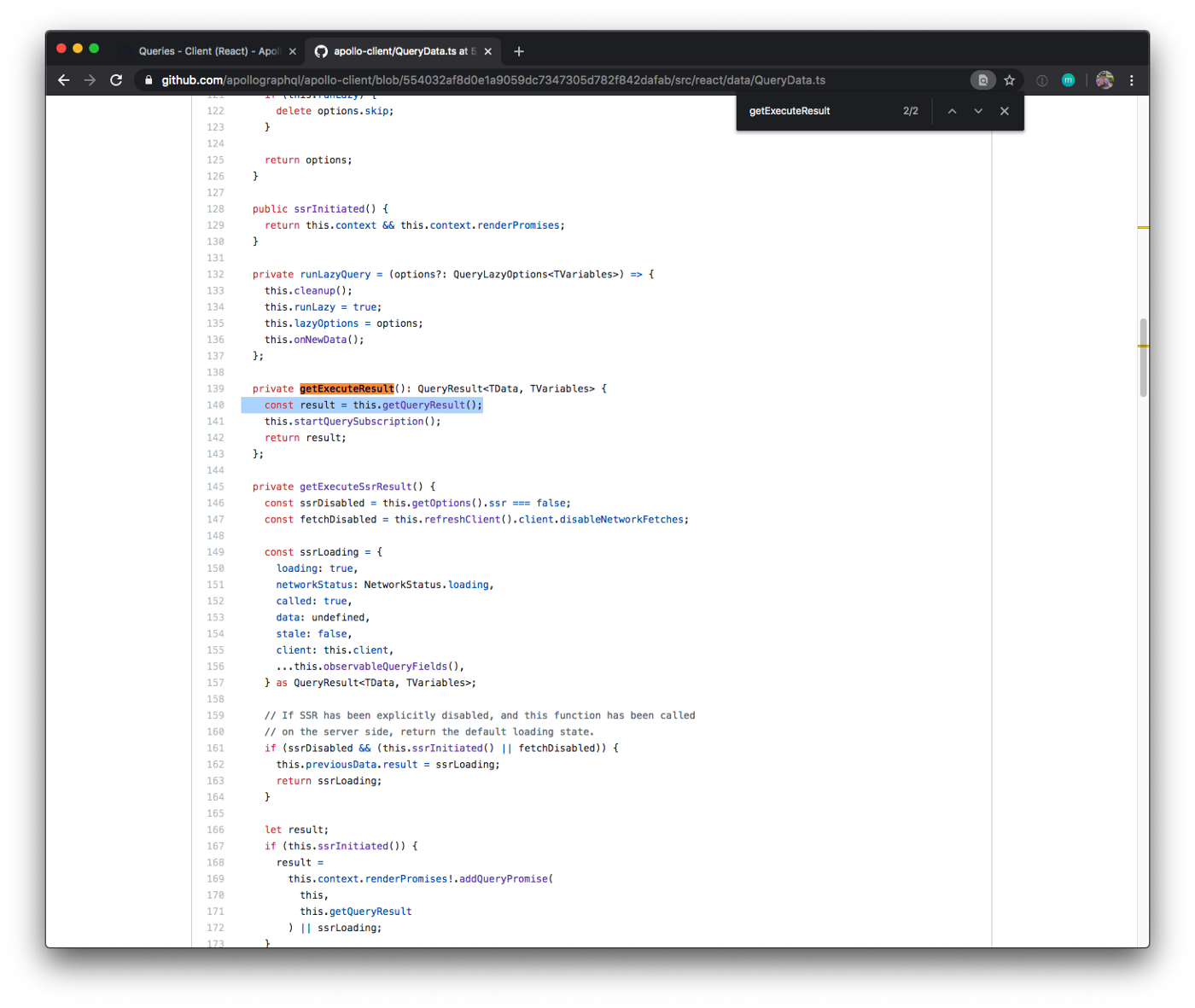 And boom! We’ve found where all the magic happens. This is the function that returns the result we’ve been looking for. Here, we’ll find loading, error, and data. 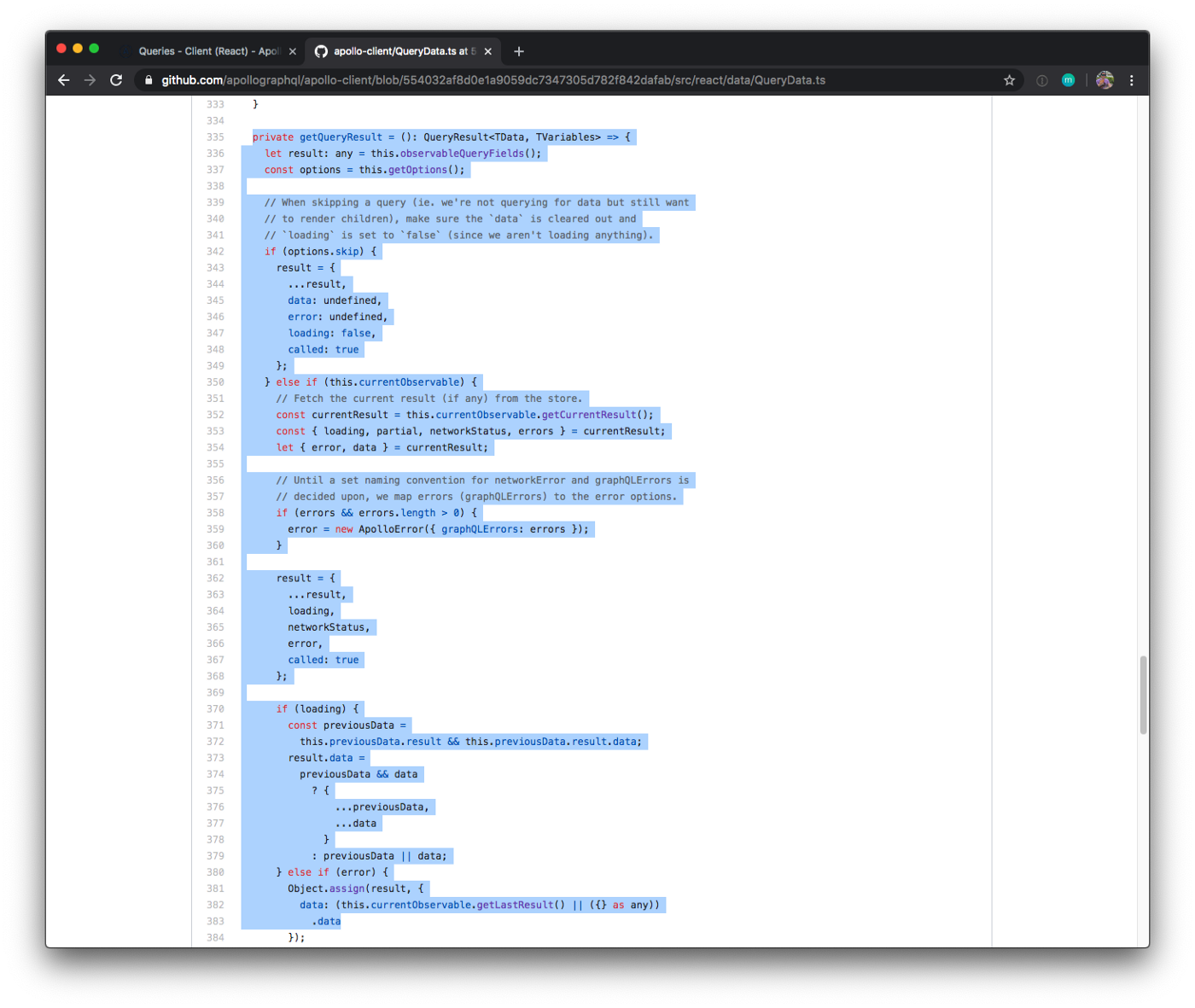 A very important step in your career is the ability to dive into the tools you use. Doing this is a crucial step in giving you the freedom you need to build software the way you want. With this in mind, go on and triumph!