How to Write Functional Tests in React (Part 1) 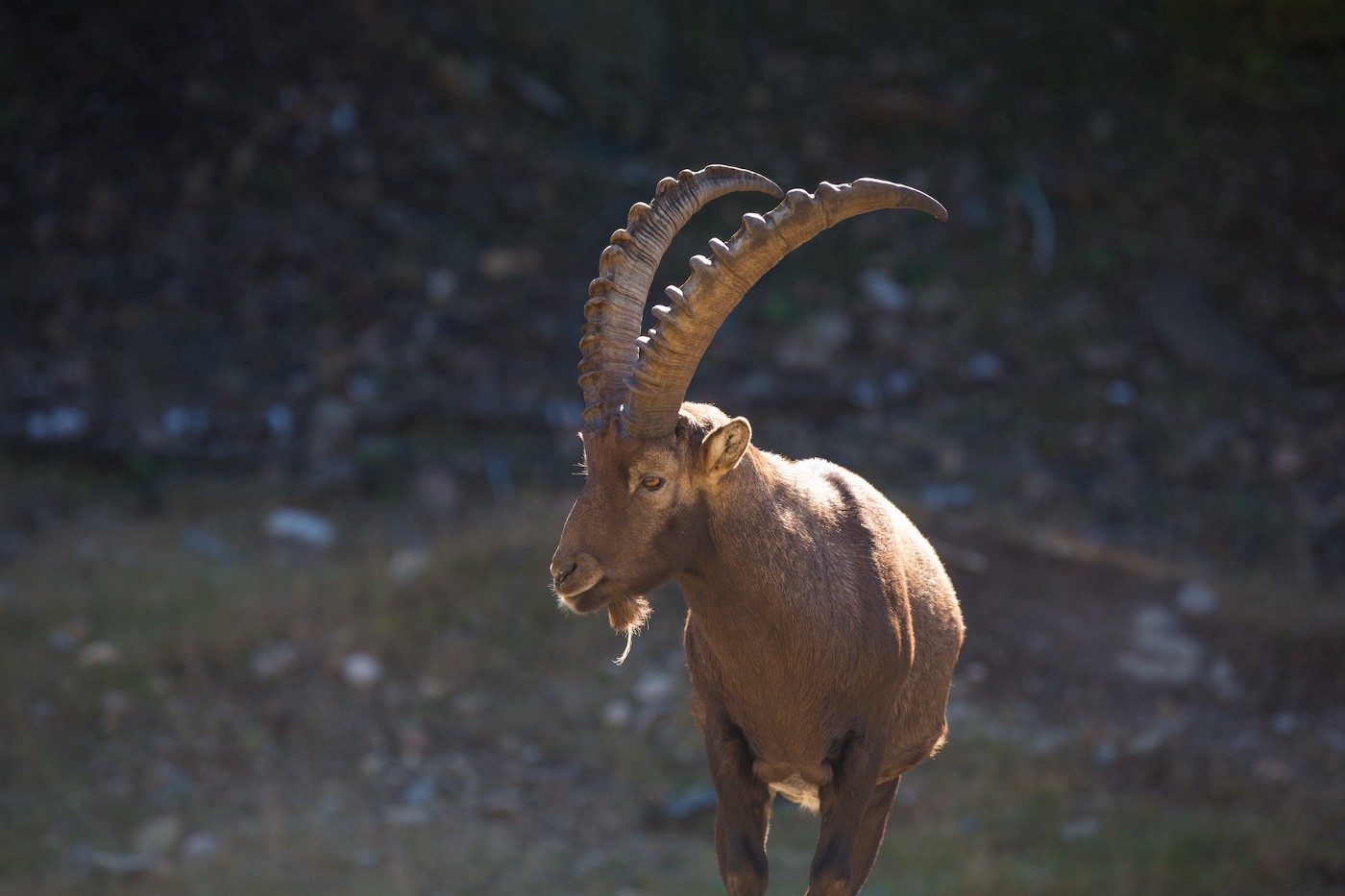 Photo by Annette Keys on Unsplash

This is the first in a series of articles that will help you build a solid foundation for testing React components.

At the beginning of the year, I set a goal to improve my code quality by focusing more on testing. I tried a handful of libraries and methods like Enzyme, react-test-render, and snapshot testing. I eventually landed on react-testing-library.

react-testing-library (RTL) is a testing framework created by Kent C. Dodds with the guiding principle of

The more your tests resemble the way your software is used, the more confidence they can give you.

How is RTL different than other frameworks like Enzyme?

Unlike Enzyme, RTL will test DOM nodes instead of component instances if said component is related to rendering. If you’d like an in-depth analysis, Kent C. Dodds has a comprehensive article about his dislikes with shallow rendering in Enzyme.

The TL;DR is that RTL does not include a lot of the utilities that Enzyme has (such as shallow and instance) because they

are things which users of your component cannot do, so your tests shouldn’t do them either.

How can I use RTL effectively?

We’ll create some basic tests for asserting form inputs. Here’s what our component will look like: 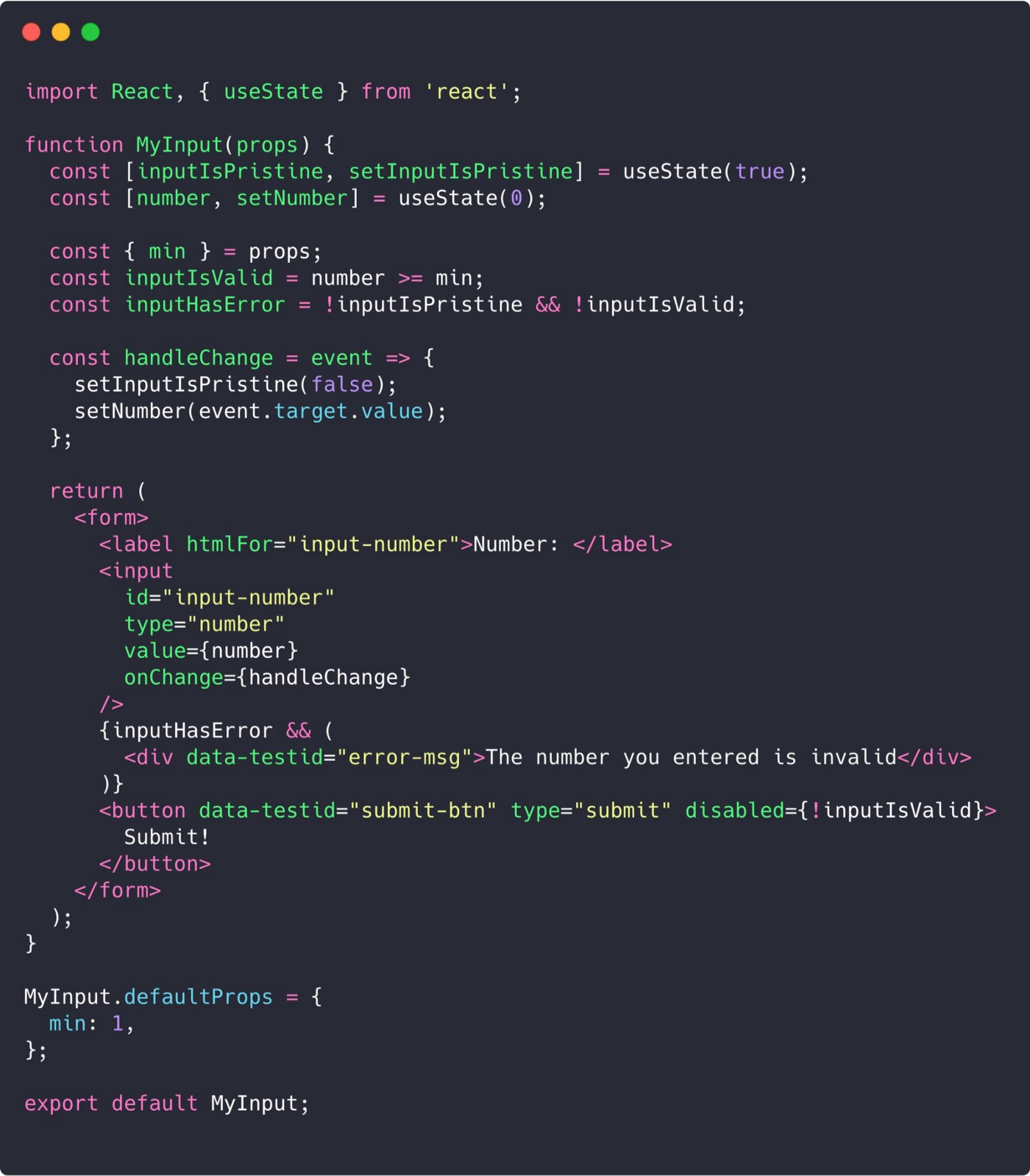 MyInput.js (but it’s actually a form 🤫)

Note: I call the component MyInput and I realize it isn’t technically an input since it’s wrapped in a form, but I did it so I could have an easy way to use the submit button with the input.

Assuming you already have jest installed in your app, we will also be installing a few other libraries. Here’s what the top of your test file will look like:

The render method is the bread and butter of RTL. In this following example, I’m showing what RTL’s render method is doing under the hood. My next example (getByLabelText) will demonstrate how to use render in our tests. 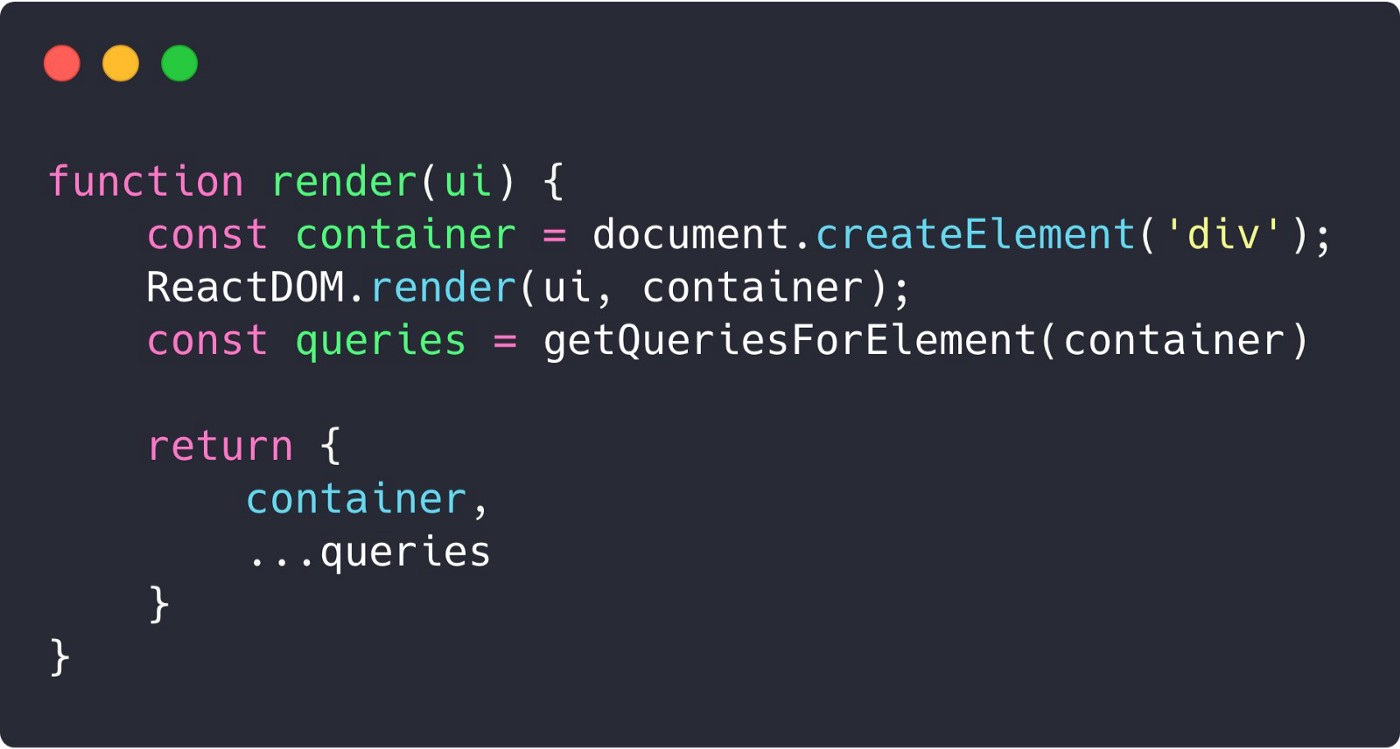 The getByLabelText utility works well for getting an input element and its associated label.

Note: getByLabelText works here because of the relationship we created between the label and input in MyInput.js. The htmlFor in the label element matches the id in the input element.

If we didn’t create the association between label and input or made a typo in the htmlFor like calling it inpoot-number, RTL would throw us an error: 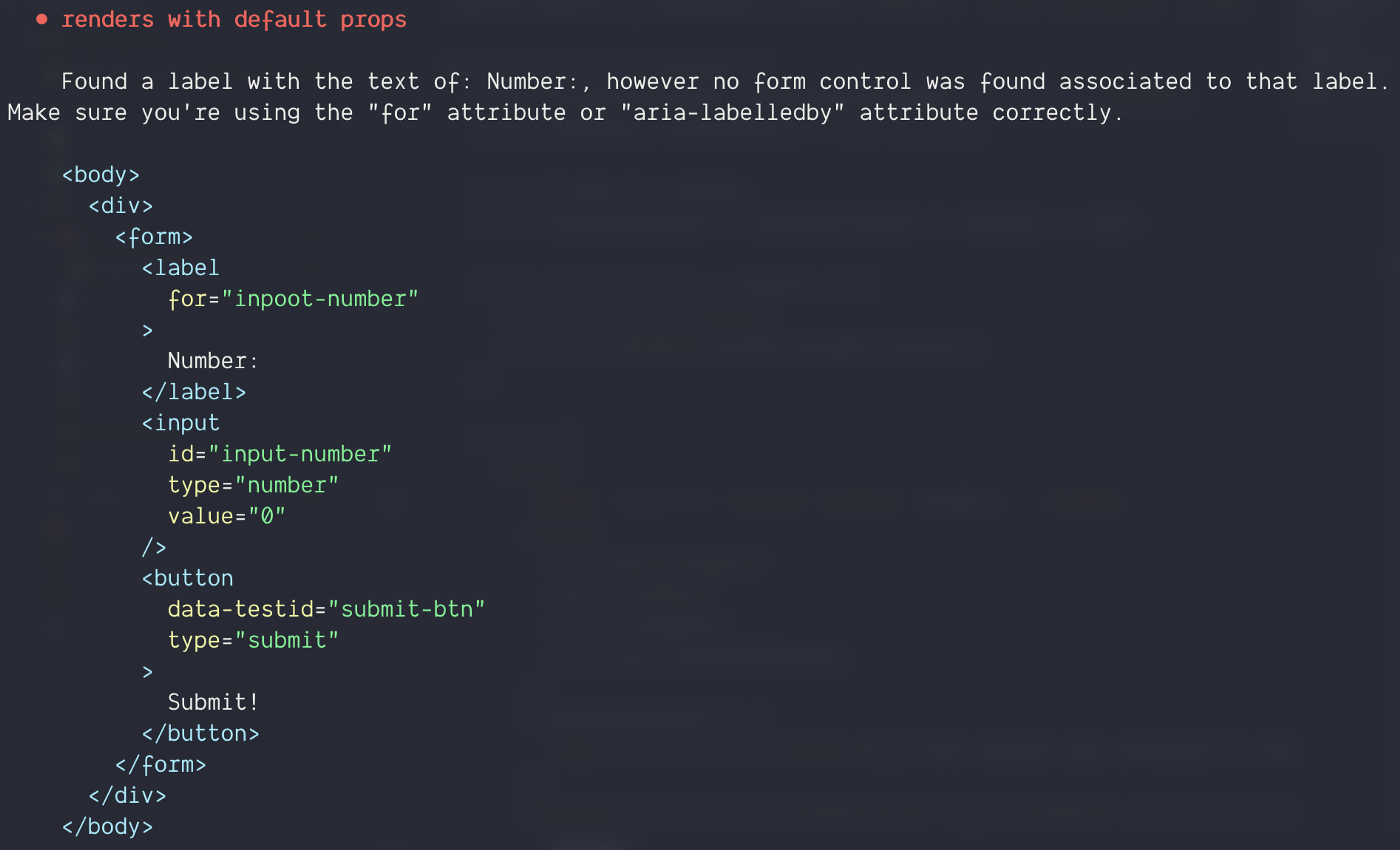 RTL’s enforcement of this relationship is great for catching typos and keeping accessibility high!

This is a method I really like about RTL. Remember that data-testid attribute we added to button? The getByTestId utility is what we’ll use to target it.

Typically, you’ll want to use getByTestId when targeting a specific element — it’s great for looking up inconspicuous divs or other elements in weird places.

This is a pretty general method that looks for any matching text that’s passed as an argument.

This is the same test we did with getByTestId except here we use getByText and pass it the button text “Submit!”

I tend to prefer using getByTestId & data-testid attributes over getByText, as the former method reduces the scope and allows me to pinpoint the exact element I’m asserting.

The fireEvent method is used to manipulate the DOM based on some sort of event. The list of events spans from change to wheel(the full list can be viewed here).

This is a two-parter to show how you can test for something to NOT be in the DOM.

For rerender, I typically use it to assert the outcome of a component after updating its props.

RTL’s debug method will log out the current structure of the DOM where ever you place it. Very useful for peeking at the state of your DOM during different parts of your tests. 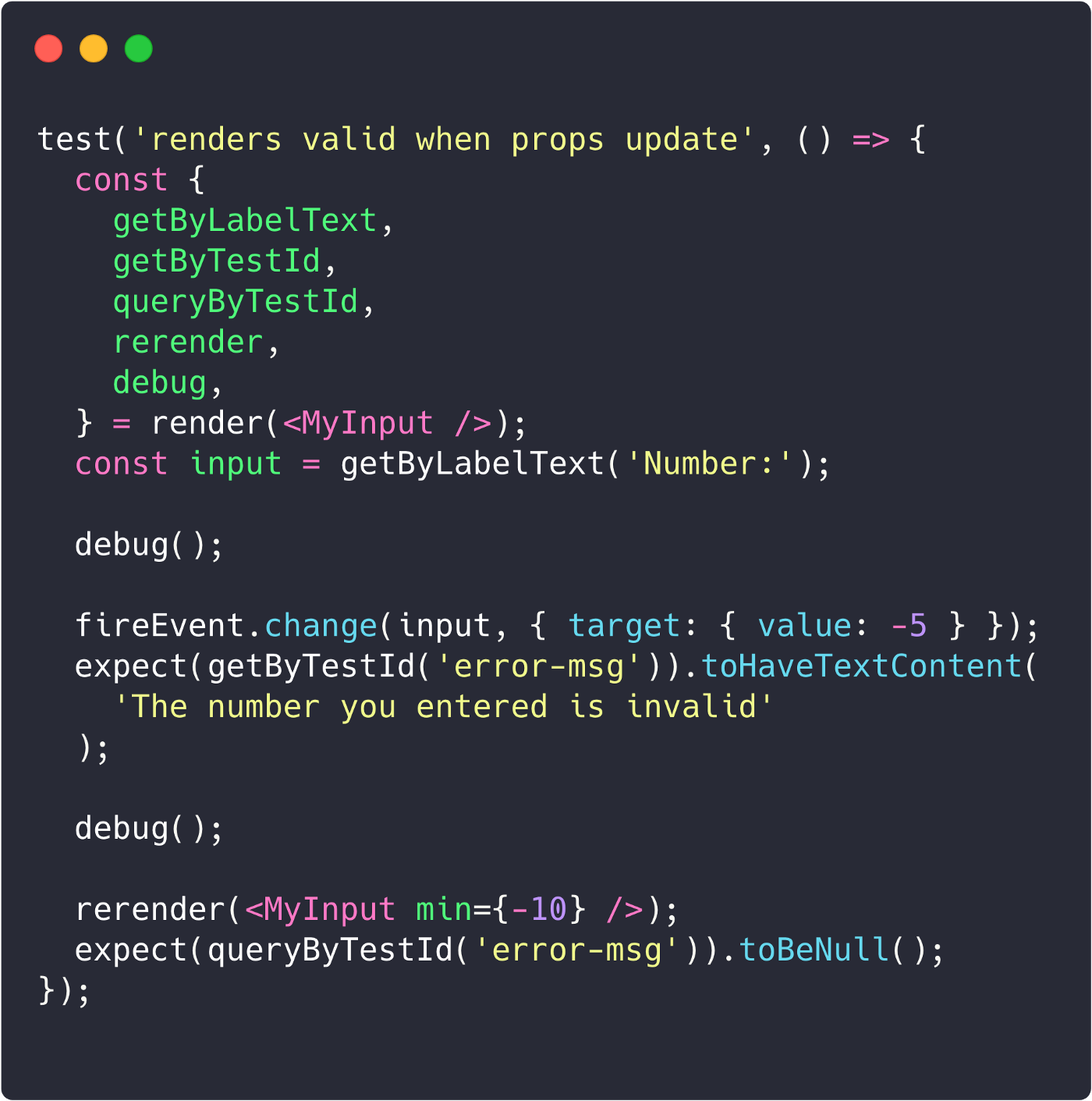 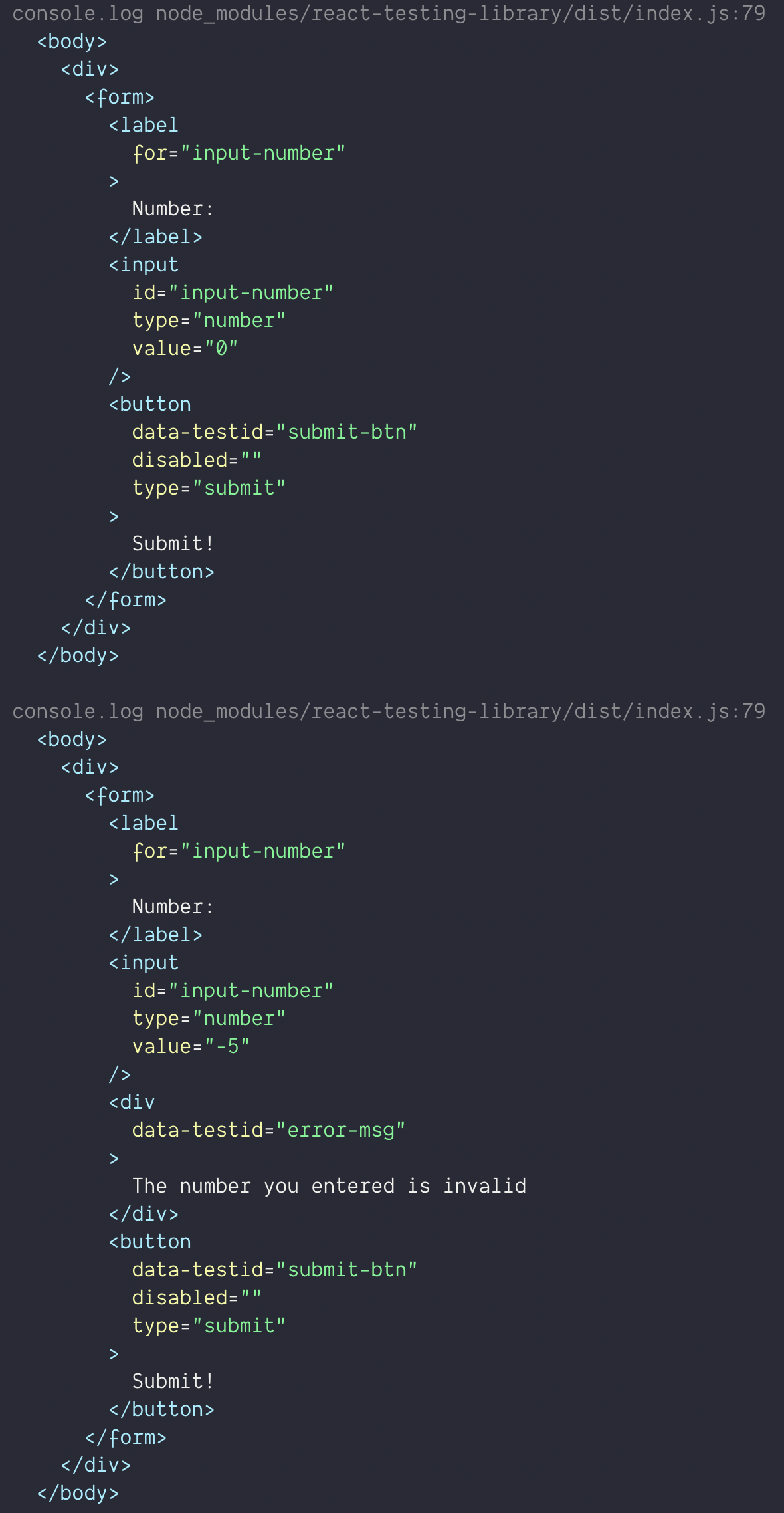 Hopefully, this walkthrough gave you a good idea on how you can implement RTL in your next (or even current) project. It’s a great way to test your components in a way that mimics your users’ interactions.

All of the examples can be found on github, or you can try it out instantly on repl.it.

If you have any other testing tips, don’t be afraid to send them my way! I just started my testing journey and would love to learn more about how to make my application more bulletproof. Also, be sure to stay tuned for the next part of this series where I will dive even deeper into testing! 🐐